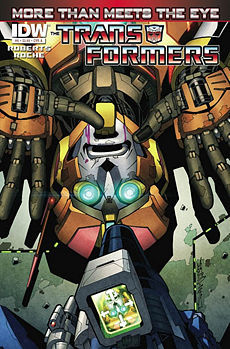 On Lost Light, you are about to shoot Rung.
A hostage situation grips the Lost Light as Fortress Maximus snaps, and not everyone escapes the experience unscathed...

The newly revived Fortress Maximus is being interviewed by Rung. Despite the psychologist's best efforts, Max refuses to talk about the horrific torture Overlord put him through. Rung is reluctantly forced to end the session.

Meanwhile, as Swerve's, everyone is relaxing, getting gently drunk, despite Ultra Magnus arresting Swerve for serving drinks without a license. Trailbreaker, feeling Fortress Maximus is overhyped, starts complaining about him, as the guy walks in. Despite the very drunk Trailbreaker's rambling, he doesn't respond. Instead, he shoots Pipes. He then goes on a rampage around the ship, shooting several other 'bots, and then holing himself up in Rung's office. Rodimus is for once reluctant to act, since he doesn't want to risk Rung's life a second time. Things turn worse when Blaster manages to patch into the camera in Rung's room, and they find he was talking to a patient when Fort Max came in. And because things weren't bad enough, it's Whirl.

Using his typical display of charm and people skills, Whirl tries to find out whether the already violent Max really is going to kill somebody in typical Whirl-style - by putting his own life in danger. Rung notices the Autobots watching him, and turns on the microphone in his thumb, before trying to determine what Max's motivation is. As it turns out, he's pissed off at the fact it took Prowl three whole years to send Wreckers to Garrus-9, where he was being relentlessly tortured by Overlord. Knowing Rodimus is listening, he demands that he turn the ship around and go back to Cybertron. As Whirl and Rung point out, by telling him what to do, he's made absolutely sure Rodimus isn't going to (though calling him "Hot Rod" doesn't help). Then, Fortress notices Rung's microphone, and rips it out.

In the med bay, Ratchet and First Aid note the casualties of Fortress' shooting spree, with Ratchet noting he only shot five people, and only those five, not the people they were with. As Ratchet notes, his targets weren't random. They were chosen, specifically because their blue colours match that of Overlord (and Whirl is also blue).

Three hours later in Rung's office, Whirl is getting bored of arguing with and insulting Max. Max, however, is finally curious as to why Whirl is such a mess. For all his talk, this is one thing Whirl doesn't want to discuss, so Max threatens Rung instead. Rung tries to explain that he has a duty of care, but Whirl relents, and explains that regular sessions with Rung are part of his probation on board the Lost Light. He then adds that he and Fortress aren't so different, something Max takes offence to. Whirl angrily retorts that before he was the 'nutjob' everyone knows, he defied the Functionists and left his old job to start a business as a watchmaker. Unfortunately he was so successful that when he refused to pay for protection, his business was destroyed by thugs. After that he started hanging out with a bad crowd, something that got him noticed by even worse people, and when he refused to follow questionable orders, he was persuaded by Empurata. As Max grows increasingly interested, Rung picks up one of his models, and starts doing something with it. He's sending a message to Rodimus.

Outside, Swerve and Rewind are on punishment duty, replacing all the rivets on the ship, though Swerve takes it in his stride, knowing Rodimus will likely ignore Magnus and let him keep the bar. He then asks Rewind why he's on punishment duty. Rewind explains that Red Alert found some data disks of his, the ones he bought from Swindle back on Cybertron, and reported Rewind to Rodimus for what he found. Swerve immediately starts asking what they were. As Rewind explains, they were snuff movies, though he refuses to explain why exactly he was watching them. Any further conversation is halted by Rodimus calling in. He's got a job he needs the two to do.

Whirl, meanwhile, continues with his story, explaining how he wound up in law enforcement, and how it all went to hell when he was told to kill a prisoner (Megatron). His superior Orion Pax made such a fuss that the incident couldn't be ignored, but Whirl was the one who ended up taking the heat. Years later he was recruited to the Autobots, until joining the Wreckers. Rung exclaims surprise, given he never said any of this before. Whirl just retorts that Rung never threatened to shoot a friend of his. Max asks why Whirl was kicked out of the Wreckers. As it turns out, it was because he'd tried to mercy kill the comatose Springer, until Roadbuster caught him and had him kicked out. And now Whirl's finished, Max realises that the ship hasn't changed course at all, and starts pointing his gun at Whirl again. In order to delay him, Rung pleads for Max to remain calm, even as Whirl gleefully confuses the situation by encouraging him to pull the trigger.

Ratchet informs Rodimus about his findings, just as Rung works it out himself, that Max's trauma stems from his torture at Overlord's hands. Outside, Rewind and Swerve had reached the window to Rung's office. As it turns out, Rodimus wants them to shoot Max. With Rewind unable to take the shot, the rivet gun is given to Swerve. Rewind, meanwhile, uses his projector to show security footage from G-9. It's enough to send Maximus into a breakdown, with Rung assuring him it's over. Unfortunately, Rodimus is unwilling to take the chance, and orders Swerve to fire. The shot misses Fortress Maximus and headshots Rung instead. Whirl uses this as a distraction to knock Max out.

Later on, Drift and Rodimus talk, with Drift expressing his concerns about the security chief, and how he spends far too much time acting on his paranoia rather than doing his job. As he says this, Red Alert steals a drill from Ore's corpse, travels to the Sparkeater's prison, and drills. He finds a room, and inside is Overlord, muttering "kill me" over, and over and over.

This issue contains examples of:

It's okay. We're done here. No more for today.