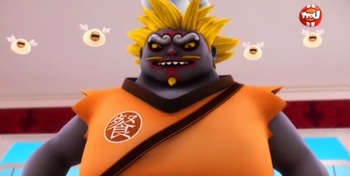 Ladybug! Cat Noir! You soon have privilege to be ingredients in Kung Food's soup. But first — you taste my special of the day!

Marinette's uncle Wang Cheng is arriving to France to compete in a serious competition. The problem is that Marinette doesn't speak Mandarin, and her uncle doesn't speak French very well. Alya calls Adrien, who does speak Mandarin, to assist and escort her uncle to the competition. More problems ensue when Chloé sabotages Cheng's soup, which gets him turned into Kung Food by an akuma.