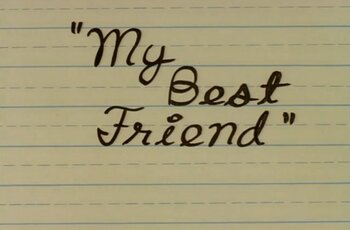 For Report Day, Mina writes about her best friend, the Count. The other kids in the class make fun of Mina, that she thinks she has a vampire for a friend.
Advertisement:

When the Count visits Mina that night, she tells him that she’s angry and wants to get back at the kids who made fun of her. The Count says that physical domination is never the answer, that psychological domination is the name of the game. So he trains Mina in the ways of the vampire.

Mina comes to school wearing a vampire cloak, using the vampire voice, and using the vampire hypnotism on the school bully, Nick. It doesn’t work. Everybody laughs at her the whole day. That night, the Count comes up with a different plan.

The next day, Nick gets a note from Mina saying that if he comes to the gym, she’ll prove her vampire friend exists. When Nick enters, he sees the vampire with his menacing voice. Immediately he runs to the schoolyard and cries to the other kids. Now Mina is happy that Nick is the one being made of.

The Count gives a report about how his best friend Mina defeated the school bully. Gathered to listen are a group of monsters: Frankenstein, Ghost, Gremlin, and Creature from the Black Lagoon. Once Vlad is done, Gremlin makes fun of him for having a little girl for a best friend.

“My Best Friend” contains examples of…