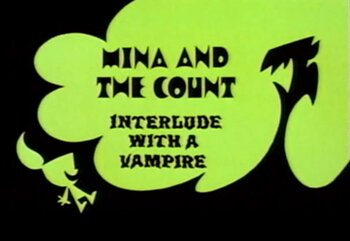 As a little girl named Mina goes off to sleep, a vampire simply known as the Count awakens and flies off into the night. After arriving at Mina's house, the Count hypnotizes Mina to lure her. But when he finds out that Mina is just a kid and not the teenager that his servant, Igor, describes on the schedule he wrote for him, the Count get angry. Mina wakes up and sees the Count as a new playmate and not as a vampire. Mina tries to play with the Count as he tries to ditch her. Even at a boarding house for young women, he can't escape her. Later, back at her house, Mina's dad comes into her room. The Count poses as one of Mina's dolls. Mina's dad becomes suspicious. Mina defends the Count by saying that he's her best friend. Mina's dad leaves and tells her to go back to bed because it is almost morning. The Count escapes through the window, turns into a bat and flies back to his castle, but not before tucking Mina in. Igor asks the Count about how it went with the schedule, the Count says that he wasn't satisfied and attacks him. Meanwhile, Mina sleeps, smiling and holding the Count's changed schedule that says that he'll be Mina's friend from now on.

“Interlude with a Vampire” contains examples of…