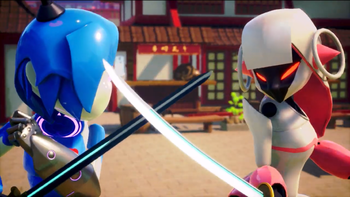 ”I’ve betted all on blue.”
Tari and Evelyn continue smashing their way through hoards of enemies in a 2 v 50 match when things take a terrible turn.
The tournament continues as Tari and Evelyn continue to fight the minions that apprehend them in Hidden Heroes. Theo is well on his way out of the corrupted Ultra Jump Mania thanks to Belle's help, but Tari and MD-5 have their own problems, especially with Evelyn and Lucks onto them.