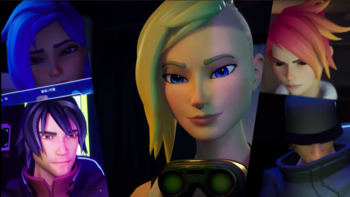 "All I can tell you is... I'm ready for this!"
Tari makes her big Meta Runner debut in one of the most action packed games she's played yet.
Advertisement:

Tari and Evelyn's big show match has arrived, and Tari and MD-5, now joined by Belle, are ready to carry out their new plan to expose TASCorp and rescue Theo. As Belle tries to get Theo out of the corrupted Ultra Jump Mania, Tari, Lamar and Masa must try to keep the game of Hidden Heroes going on long enough for the incriminating data on TASCorp to be transferred. But Evelyn isn't the patient type....