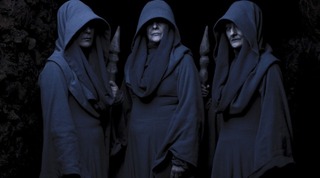 Inside a dark cave, three hooded soothsayers chant and dip the tips of their staffs into the water of a pool before them. One kneels down to retrieve a coin from the water. A man named Osgar waits outside; the coin is given to him and he is told: "The fate of Arthur Pendragon lies in your hands now."

Meanwhile, Mordred and Arthur are engaging in combat in Camelot's training grounds. Merlin looks on worriedly - and then a little grumpily when Arthur can't stop talking about how promising Mordred is as a young knight. Though he shares his concerns with Gaius, he's only told that the future isn't set in stone: they don't know for certain that Mordred will kill Arthur.

During a council meeting, Sir Leon enters the room with some bad news. Whilst trying to apprehend a sorcerer called Osgar, one of Arthur's knights was killed. Despite Guinevere's attempts to convince Arthur to stay in Camelot and let his knights bring Osgar to justice, Arthur is determined to avenge his old friend. And as an added bonus - he's decided to take Mordred on his first mission! Mordred is delighted at the news, promising that he won't regret it.

Naturally, the other knights can't resist ribbing Mordred a little as they prepare for their departure, whilst Merlin voices his doubts to Arthur concerning Mordred's youth and inexperience. From the front steps of the castle, Guinevere asks Merlin to look after Arthur, and the two friends share a resignated smile about how difficult Arthur makes it.

Whilst riding through the forest, the knights partake in some more fazing of Mordred, having convinced him that all knights should ride backwards in the saddle in order to "meld" it. Having noticed signs of Osgar's passage, they all dismount and begin to follow him on foot, swords drawn. Having separated from the others, Elyan and Gwaine spot Osgar sitting on a log in the forest ahead, though he turns around quite calmly as they approach, telling them that he has an important message for Arthur. But Elyan and Gwaine are a little sword-happy today, and having stabbed him in the side, are flung through the air to be knocked out by a couple of trees. Osgar staggers away, holding his side.

He reaches Merlin, Arthur and Mordred in another part of the forest and falls at Arthur's feet.

Osgar: I am sent from the sacred Disir to pass judgment on Arthur Pendragon, the Once and Future King.
Mordred: What right have you to pass judgment?
Osgar: No man is above the Disir, however royal. It is my duty to pass their judgment onto you, dread king. My sacred duty...

From his robes he pulls out the coin and offers it to Arthur, telling him that it is both judgment and fate. Having waged war on the Old Religion, the ancient gods are now answering him. Before he dies, Osgar gives Arthur a final warning that it's not too late to change his path.

A while later, Mordred approaches Merlin as he finishes piling rocks onto Osgar's simple grave. Mordred reminds him that sorcerers aren't allowed to have marked graves, and Merlin tries to tell him that one day people like them will live in freedom and safety.

Mordred: Until then, we go unmarked in death as in life.

Merlin looks unsettled by this, and is clearly still unhappy when Arthur and the rest of the knights settle around the campfire by night. Arthur raises a toast to Mordred's first successful mission. When Merlin points out that Osgar could have easily killed Arthur, he shrugs it off and throws Merlin the coin, having already dismissed the man's warnings.

It's exposition time back in Camelot as Gaius explains the meaning of the coin: it was given to those found wanting by the court of the Disir. The Disir are three women chosen at birth to become soothsayers, interpreting the words of the Triple Goddess, and are the highest court of the Old Religion. Gaius tells Arthur that the coin is the judgment of the gods against him, as well as a symbol of his fate - one that can only be avoided if Arthur were to repent and appease them.

By night, Merlin leaves the castle and calls for the dragon. Kilgharrah tells Merlin that the Disir are the mouthpiece of the Triple Goddess and that she has predicted Arthur's death. When Merlin asks for more details, Kilgharrah likens Mordred and Arthur to ivy around a tree - and that to save the tree, sometimes the ivy must be cut. If Merlin gets another chance to kill Mordred, he must take it.

In their bedchamber, Arthur and Guinevere are discussing Osgar's death. Though she tries to tell him that he was just a fanatic, Arthur is taking the situation increasingly seriously. Later that night he goes to the physician's quarters, demanding to know where he can find the Disir. Gaius reluctantly tells him that the source of the spring that feeds their pool is in a grove of yew trees in the White Mountains. Arthur decides to leave within the hour, and Gaius warns Merlin that the powers of the Old Religion will be at their strongest there.

By morning Arthur and the core team of knights are ready to go, and Mordred asks if he can accompany them. Though Arthur is hesitant at first, Mordred's sincerity wins him over, and together they all head out. One travelling montage later, and the group is heading through a forest hung with Blair Witch symbols. Now on foot, they approach the entrance to a small cave and barge through, being rather careless with the decorations on the way in. On reaching the large cavern, they find themselves facing the three hooded Disir. Arthur throws the coin at their feet and demands an explanation. They tell him that though he's a fair and just king, he persecutes the people of the Old Religion and by doing so offended the Triple Goddess. The urge him to embrace the old ways, or else Camelot will fall. They're getting ticked off.

The Disir: And now you come here, to the most sacred of the sacred, to the very heart of the Old Religion, with weapons drawn, trampling hallowed relics, treating our sacred space like you do our kingdom: with arrogance, with conceit, with insolence!

Gwaine steps forward angrily and is flung against the rock wall. One of the Disir levels her staff like a spear and flings it at Arthur, only for Mordred to do a full bodyguard hurl and take the injury for himself. As the knights retreat, a second Disir throws her staff, only for Merlin to deflect it with magic without anyone seeing. She raises her head high enough to look Merlin in the eye before he flees after the others.

Outside, Mordred lies in Arthur's arms as Merlin checks over the wound. There's a moment of deliberation, and Merlin declares that his injury lies outside his ability to heal. He says they need to get him back to Gaius, though Arthur is afraid he won't survive the journey. On the way home, Arthur comments to Merlin that this is the second time Mordred has saved his life.

Soon enough, they're back in Camelot and Mordred is being tended to by Gaius. Arthur watches in concern as Gaius tells him that the wound is magical in nature and that there's little he can do. Arthur leaves the room and Gaius turns to Merlin.

Gaius: Only your magic can save him.
Merlin: I cannot save the life of a man destined to kill Arthur.
Gaius: If Mordred is destined to take the king's life, why has he just saved it?
Merlin: I cannot ignore what the dragon said.
Gaius: What happened to the young boy who came into my chambers just a few years ago?
Merlin: He grew up. And he learnt the meaning of duty.

Guinevere tries to comfort Arthur, but when he tells her that he should have listened to her (by not taking Mordred) she points out that if he hadn't, then it could have well been Arthur in Gaius's chambers. Mordred did his duty so that Arthur could do his: be king. There's a knock on the door and Arthur and Merlin come inside to tell them both that the poison in Mordred's system can only be cured by the Disir themselves. Arthur decides to go back to them and beg for mercy.

Arthur and Merlin gallop back to the yew grove and Arthur removes his sword before entering the cave. Before the Disir he kneels and apologizes for his behaviour. He begs for Mordred's life, and in payment the Disir demand that he bow to the Goddess. They give him until dawn to decide.

Outside, Merlin tends to the campfire and asks Arthur what he plans to do.

Arthur: My heart says do whatever I have to do to save Mordred. But I've seen what misery unfettered sorcery brings. Before my father outlawed magic, Camelot was almost destroyed by sorcery. In my own time, Morgana's used it for nothing but evil. What would you do in my place?
Merlin: Me? I'm just a lackey, a maker of beds.
Arthur: Lackeys can be wise. It's not like you to be silent.
Merlin: The kingdom's future is at stake.
Arthur: And a man's life.
Merlin: You must protect Camelot, you must protect the world you've spent building. A just and fair kingdom for all.
Arthur: You'd have me sacrifice a friend.
Merlin: I would have you become the king you're destined to be.
Arthur: If I do save Mordred, all my father's work will be for nothing. Sorcery would reign once more in Camelot, is that what you'd want? Perhaps my father was wrong, perhaps the old ways aren't as evil as we thought. So what should we do? Accept magic or let Mordred die?
Merlin: There can be no place for magic in Camelot.

As dawn breaks, Arthur returns to the cave to tell the Disir that he rejects their offer. To this, they tell him that he's sealed his fate and that of his kingdom. Arthur and Merlin leave in silence.

On the way back, Merlin tries to tell Arthur that he did the right thing by saving Camelot, but Arthur feels that he's condemned a man to death. They ride into the courtyard and hand over their horses to the waiting knights - only to look up in astonishment as Mordred emerges from the castle, fully healed.

Merlin stands with Gaius in the castle hall, looking down at the training area. Merlin has realized what he's done: by refusing the Disir's offer, they've restored Arthur's Bane to full-health. Now he's free to fulfill his destiny...