Lucifer (2016) is a fantasy comedy/drama series loosely based on the character of the same name from Neil Gaiman's The Sandman and Mike Carey's Lucifer, revolving around the eponymous demon leaving Hell for Los Angeles, becoming a nightclub owner and LAPD consultant in the process. The show ran on Fox from 2016 to 2018, and on Netflix from 2019 to 2021. 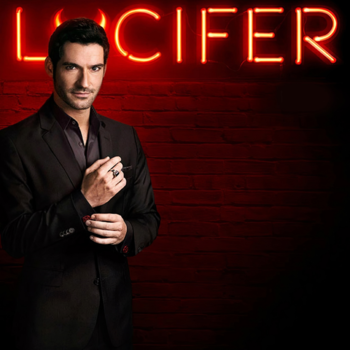 Hot as hell.
Lucifer, the Prince of Darkness, had grown bored of living in Hell and decided to move to Los Angeles alongside Mazikeen, his demonic assistant. In the City of Angels, he established a popular nightclub called Lux. When a singer who used to work for him is killed by a drug dealer, Lucifer teams up with LAPD detective Chloe Decker to solve her murder.

Realizing how much he enjoys the thrill of working to solve crimes, Lucifer arranges for himself to become a consultant for the LAPD and partner to Chloe, despite Maze's misgivings. He helps Chloe to solve the Palmetto case, something that her estranged husband, Daniel Espinoza, seems to know more than he lets on. Lucifer's further involvement with the human world also leads him to regularly meet with a therapist, Linda Martin.

Meanwhile, Lucifer's older brother, the archangel Amenadiel, tries to force him to go back to Hell and fulfill his role as God intended him to do. When it does not work, it drives Amenadiel to extreme measures, one of them being resurrecting detective Malcolm Graham to help him bring Lucifer back to Hell.
Season 2 (2016-2017) 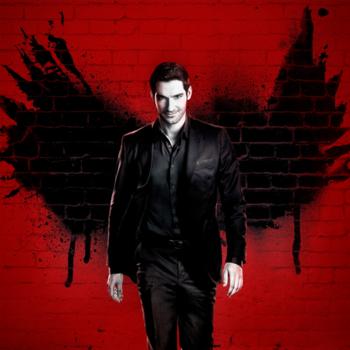 In the City of Angels, he's not one.
Due to their conflict on Earth, Lucifer and Amenadiel forget about watching over Hell, letting their mother, the Goddess of Creation, escape. God previously sent Lucifer to capture her, but for now he has no idea what to do with her. This becomes complicated when it turns out that Goddess is manipulating her children in her vendetta against God, yet is also morally conflicted because of the impact her actions do to her relationship with them.

As Lucifer continues his partnership with Chloe, he begins to fall in love with her. However, the revelation about her true nature causes him to doubt whether their attraction is genuine.

Meanwhile, Amenadiel has to deal with the consequences of his actions in the previous season that transform him physically and psychologically. Maze familiarizes more with humans, befriending Linda and moving in with Chloe. Dan, whose devious actions cost him his job, tries to move on with his life as a bottom feeder in the LAPD, which welcomes a forensics analyst transfer from Detroit, Ella Lopez.
Season 3 (2017-2018) 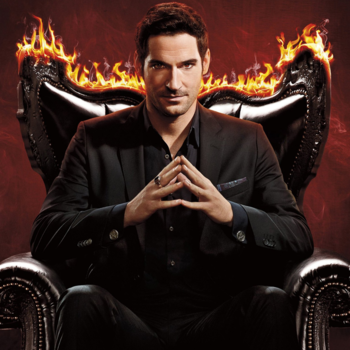 Hell yes.
After regaining his wings and losing his devil face in the last season, Lucifer thinks his father is to blame for this. This causes him trouble when he attempts to reveal his true nature to Chloe, further straining their relationship.

The LAPD welcomes a new lieutenant, Marcus Pierce, a gruff man who nevertheless shows a softer side, particularly around Chloe. However, Lucifer is suspicious, a feeling that proves true when he learns just who Pierce actually is.

Meanwhile, Amenadiel and Linda are romantically involved, straining their relationship with Maze. Dan is confused and angry when Charlotte Richards, an attorney whose body was used as a vessel by Goddess during Season 2, neither remembers him nor their romance, though they slowly mend their relationship. Charlotte herself is traumatized from the torture she experienced in Hell.

Originally filmed with Season 3 and planned to be moved into Season 4, these were instead aired as a one-night event shortly after Fox cancelled the series, but before Netflix revived it.
Season 4 (2019) 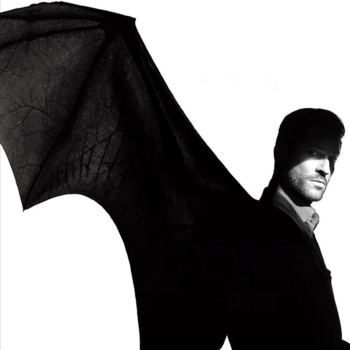 Lucifer is worried about Chloe after the events of Season 3. Although she claims to be okay, it turns out that she was sent into a shock, one that nearly leads her to take drastic measures that almost cost her friendship with him.

To move away from the stress of it all, Lucifer begins a relationship with Eve, the mother of all humanity, who seems to represent everything that Chloe is not: untamed and open-minded of his true nature. However, a dark prophecy that supposedly involves Eve makes Lucifer think that she might cause more trouble than it is worth.

Meanwhile, Amenadiel and Linda are expecting a half-human, half-angel baby, something that has no precedent in history, with Maze helping them with the preparations. Dan is grieving after losing a loved one, while Ella has lost her faith in God, in the wake of a painful revelation about her idol, Marcus Pierce. 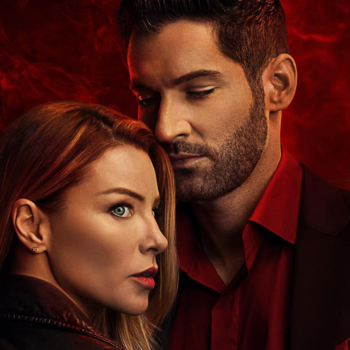 Give in to temptation.

Lucifer's twin brother, Michael, suddenly descends from the Silver City to manipulate his loved ones, forcing the Devil to confront him. In the process, he has to deal with all the developments on Earth which he excused himself from: Chloe's love for him, Maze's abandonment issues, and Amenadiel's and Linda's newborn son. All the while, Michael is laying low, playing tricks and waiting to strike again when the time is right. 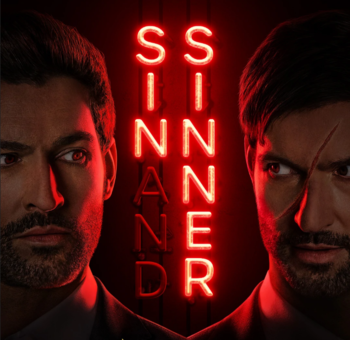 To everyone's surprise, God Himself has left Heaven to reunite with His children and make peace with Lucifer. Despite this, the Devil isn't too fond of his father, especially when realising just how embarassing He is. When God announces His retirement, it's time for Lucifer and Michael to fight over which one will replace their father. Meanwhile, Maze has problems with herself after still not having - and then suddenly having - a soul, Ella has to get over the revelation about her boyfriend, and the entire team loses one of their members. 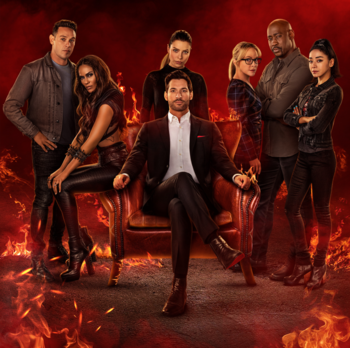 All bad things must come to an end.

Lucifer is insecure about his ascension to Godhood and puts it it off for the time being. Things get worse when an unexpected visitor from the future arrives to confront him. Lucifer will have to face the fact that the future that awaits may not be the same one that he envisioned with Chloe. Meanwhile, Amenadiel attempts to transition to his new role as a police officer in the LAPD, which welcomes a new detective who becomes close with Ella. Maze and Eve are planning for their wedding, while Dan has to figure out a way to achieve true salvation.