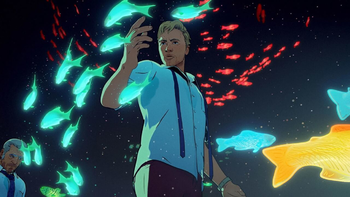 "If the ghosts of people can haunt a house, well, why can't the ghost of creatures haunt where they once lived?"
Advertisement:

A pair of traveling salesmen happen upon something extraordinary when they are stranded in the Arizona desert. Based on the short story of the same name by Joe Landsale.