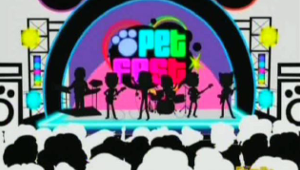 "You couldn't ask for a better ending than this, huh, Blythe?"
Story by Julie McNally Cahill & Tim Cahill and Guy Toubes
Teleplay by Guy Toubes

After a Previously On… segment, the episode picks up directly where Part 1 left off: Blythe nervously ambles around the entrance to the park, thinking of what to do now that she cannot use Downtown City Park for the Pet Fest, with Youngmee attempting to calm her down. Her words are to no avail, however, as Blythe suffers an emotional breakdown, convinced that the Pet Fest is done for. Youngmee consoles Blythe with telling her the Biskit Twins are sorry, then growling at them to scare them into apologizing. Blythe then asks the twins to call their father Fisher to see if he can find a place for the Pet Fest. Whittany gives her father a call, but he refuses, calling her out on her irresponsibility. Without any ideas left, Blythe asks Youngmee sarcastically where she can find a place that will set aside the space needed for the Pet Fest, promising to eat her shoe if there is. Mrs. Twombly walks up and suggests the Pawza Hotel, and a shocked Blythe regrets what she said about shoes. Blythe calls Sophie at the Pawza, and Sophie agrees to hold the Pet Fest there, no questions asked, and a delighted Blythe, Mrs. Twombly, Youngmee, and the pets get into the Littlest Pet Shuttle. Before they take off, Blythe requests the Biskit Twins, still standing by their limo, to tell everyone who comes by the park that the Pet Fest has moved to the Pawza. Recalling Fisher's berating them on their lack of responsibility, Whittany hands the task over to François via calling Fisher over the phone. Fisher, not pleased at her behavior, orders François to drive the limo back to the mansion by himself, stranding Whittany and Brittany at the park entrance to force responsibility onto them.

At the Littlest Pet Shop, Jasper films a commercial to promote the Pet Fest. Blythe demonstrates the events that will go on at the festival, emphasizing the appearances by the Soul Patches with Jasper discussing their collaboration with the Endangered Animal Fund and their poster pets. Vinnie and Sunil, watching Jasper's TV commercial, assume these animals are endangered due to their clumsiness, and Vinnie decides to be the endangered animals' guards, protecting them from themselves, though not before accidentally hitting Sunil on the nose.

Everyone having moved their operations to the Pawza Hotel, Russell dedicates a room to the "Pet Fest Fun Park," having filled it with tunnels, slides, a zip-line, and toys on the floor. Russell makes sure everything he has planned for the Pet Fest Fun Park is present as Pepper, Zoe, and Minka play around. However, Zoe points out to Russell that she hasn't heard him mention anything about their planned stage, so to reassure her, Russell tells her the location of that stage. Zoe, walking over in that direction, is overjoyed and, keeping in mind that Heidi is a professional, requests lasers, smoke, and a hydraulic platform for herself. Russell brushes it off as Blythe walks into the room, announcing to the pets that there isn't much time to prepare. The pets walk off, and Russell and Blythe compare their clipboard, his Clippinator 3000 with triple holding power versus her Powerclip X7, which extends outward for long lists. The two toast each other via their clipboards and head out. As Blythe is about to enter an elevator, she sees Madison in there, also heading up, and they discuss how they feel about the Pet Fest's change of venue. While in the elevator, Blythe continues to make sure everything is present. The second floor contains fashion booths for pets and people, the third floor has a dance room, and the fourth floor has food-related exhibits. With everything on Blythe's checklist accounted for, Blythe feels relieved, as the time is approaching for the Soul Patches to arrive.

A limo pulls up to the Pawza with a crowd standing by the entrance. Disembarking are the Soul Patches' pets, including Heidi. Zoe emerges from the hotel to greet an enthusiastic Heidi, with Russell coming shortly afterwards to introduce the two of them to his stage. The path that Zoe, Russell, and the Soul Patches' pets take has them pass next to the Endangered Animal Fund's poster pets, but Sunil and Vinnie, attempting to protect them, force the group on a detour.

With the Soul Patches' pets where they need to be, Blythe officially opens the Pet Fest. The attendees come pouring in, and Adam and the Spider Monkeys start performing. Interest gathers around Youngmee's pet treats, which the animals now like, as some pets are having fun at the Fun Park and Josh readies himself at the Blythe Style booth. Blythe, on cloud nine, proclaims that nothing can go wrong when she suddenly sees Madison and Bernard Solid again, both of them with regretful expressions. Bernard gives bad news to Blythe: The Soul Patches will be unable to perform at the Pet Fest because there's no area for them to set up. This puts Blythe into a panic, frantically going through her checklist. Madison tries to help by showing the stage the pets put together, but, unprofessional handiwork aside, the stage is much too small for humans to use. Blythe, desperate, asks Madison if there's any other possible location, but Madison says that the only unused space in the Pawza is the roof. With that in mind, Blythe rushes to the roof to try to create a stage. When they leave, Russell introduces Zoe to the stage. Zoe is horrified at its condition, but Russell tells her that it's the best they could do with squeaky hammers. Pepper does not mind, however, and starts a stand-up act from out of the blue. After one joke, which the audience is unamused at, Russell tells Pepper to wrap it up so that Zoe and Heidi can go onstage. Pepper, realizing she doesn't know the name of the following act, asks the two dogs what they're called. They provide different names, so she declares them "Undecided" and clears the way for them.

The curtain pulls away to show the other four members of the Soul Patches' pets' band, with Zoe and Heidi rising up from the middle. The platform, however, is just a wooden board, lifted upwards by Penny, Minka, and Russell pulling on ropes with a pulley system. They quickly run out of stamina, and Zoe and Heidi come crashing back down. Zoe, appalled, asks if that was his hydraulic lift, so Russell apologizes and tells her that they couldn't afford a real one. Zoe then inquires about the other special effects, with Penny showing the "laser light show" as a flashlight she intended to turn on and off and the "smoke machine" as Minka jumping on a bag of flour. Zoe deems the stage unacceptable and kicks a support for the stage in frustration, causing it to come crumbling down. Sunil and Vinnie, sensing the quaking, rush over to protect the white leopard and the polar bear, respectively, and announces they are safe.

As the rooftop stage gets finished up, Bernard voices his awe at what he sees. All of a sudden, Madison screams, breaking Bernard's sunglasses again, which means the Soul Patches are here. Jason #1, Jason #2, Hayden, and Dustin, standing behind Blythe, are equally impressed by the stage, but Jason #1 regrets that they cannot play there—Ted, their bassist, is cowering behind the door. Jason #1 explains that Ted has a crippling fear of heights, and the Soul Patches cannot go on without him.

A bit later on the rooftop, Jason #1 and Dustin attempt to coax Ted into stepping onto the outside area, but he simply retreats further into the elevator hallway. Blythe, feeling like there's no hope left, rants to Youngmee, who has since traveled up to the roof, but Youngmee explains that although Blythe has had repeated setbacks to the Pet Fest, there was always someone else there who provided Blythe with the means needed to keep going. Blythe tells her that this simply meant the Pet Fest was something she could not do herself, but Youngmee points out that this has always been a collaborative effort and that Blythe is full of friendly support. Blythe realizes Youngmee is right but is stumped as to who to turn to to help Ted onto the stage. As a last resort, she tries contacting the Biskit Twins.

Brittany and Whittany, still stuck at Downtown City Park's entrance, get a call from Blythe telling them that the Soul Patches need their help. Without a limo or any money though, the twins have no means but to walk. Whittany grumbles that it'll take a long time, but they proceed anyway for the sake of the Soul Patches.

With Russell at the drawing board and back, the pets attempt to perform onstage again. This time, Heidi and Zoe are raised onstage by a car jack. The jack malfunctions though, and the platform crashes again. Zoe, livid at Russell, blames him for ruining their act, but Heidi says that dramatic entrances are for the Soul Patches and that Heidi and her group just like to sing and play music. Although Ocho crashes into Zoe from the zip-line, Zoe gets up feeling better than ever, inspired.

Blythe walks past the wooden barricade Sunil and Vinnie have erected around the Endangered Animal Fund trio and asks what they're doing. Sunil and Vinnie tell Blythe that they are protecting the three of them from danger. Although Blythe tries to elaborate what an endangered species is, neither Sunil nor Vinnie understand what Blythe means. Before she can explain further, Madison contacts Blythe through her walkie-talkie that the Biskit Twins have made it to the Pet Fest. As she leaves, Blythe tears off a piece of tape, causing the fortress to collapse around an annoyed group of Endangered Animal Fund poster pets.

Night has fallen, and the Biskit Twins have been assigned to stand on a platform extending upwards from the Soul Patches' stage, with Ted being instructed to look upwards at them to not feel so high up. Before they head onstage, Blythe provides fuzzy hats for each of the Soul Patches, themed on their pets.

As the pets' performance begins on the small stage, Zoe and Heidi enter the stage via the zip-line, inspired by Ocho. At the same time, the Soul Patches begin their song, "Pets and Humans." As Zoe and Heidi wrap up their music, they lead the other pets up the elevator and onto the rooftop, where they reunite with their owners and anyone else they feel a connection to.

With the Pet Fest wrapped up, Jason #1 announces to the crowd at the entrance that the Pet Fest managed to bring in an unprecedented amount of money towards the Endangered Animal Fund, so much that Blythe has been named a special ambassador to the organization. When Blythe steps up to the podium, she explains that a lot of credit should also go to Youngmee, as Youngmee came up with the idea for the Pet Fest and that she helped maintain Blythe's sanity when things were going wrong; and to the pets of the Littlest Pet Shop, who helped with much of the event's setup and continue to inspire Blythe every day. When Jason #1 tells Blythe that everything has gone perfectly for her by the end, Blythe notices Josh in the audience waving at her. Blythe is lovestruck for a few moments but then says that she feels like she's forgetting something.

Meanwhile, the Biskit Twins are left stranded on the platform high above the Soul Patches' stage, after everyone else has left. Brittany suggests they leave, but Whittany counters that there's no limo to pick them up. The lights at the Pawza then go out.