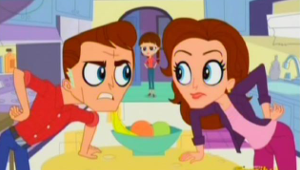 Blythe and Youngmee enter the Littlest Pet Shop after school with Blythe complaining about the tuna lunch when the two of them hear echoing moaning coming from upstairs, startling them both. Youngmee arms herself with a squeaky chew toy, and Blythe and Youngmee decide to head up and see what's going on. When they reach the top, they find Blythe's father Roger meditating in the dark. Turning on the light, Blythe and Youngmee walk over to Roger to see what's going on, with Sunil, Vinnie, and Minka watching from a corner unnoticed by anybody. Though Youngmee is confused, Blythe figures it out and taps Roger on the shoulder, asking if Aunt Mo has anything to do with his current behavior. This instantly sets Roger off on a rant about Aunt Mo and how she isn't coming over, which Blythe interprets as Aunt Mo actually coming over. Blythe tells Youngmee that Roger and Mo are fiercely competitive, which Roger denies, Roger claiming that they're both adults and have matured as Roger becomes increasingly angry. Sunil and Vinnie watch from the edge of the second floor, becoming interested in what will happen. To that end, they make a bet: Vinnie believes Roger and Mo will remain peaceful whereas Sunil believes they will constantly bicker and fight. However, Sunil tricks Vinnie into accepting the conditions, which will result in Vinnie having to clean Sunil's magic props either way.

Roger explains to Blythe that this visit from Aunt Mo will be different from the previous three or more times, so Youngmee asks Blythe what happened in the past. Blythe recalls when Roger and Mo had attempted playing chicken with skydiving, the loser being whoever deploys their parachute first—both of them yank the other's cord simultaneously, tumble through a tree, and accuse the other of having lost. In addition, during their teenage years, Roger and Mo tried a trapeze stunt in a circus, but both of them insisted on doing all of the flipping with the other simply catching, resulting in both flipping and neither catching, causing them to fall. As Blythe finishes explaining, she catches Aunt Mo at the Littlest Pet Shop window and runs over, with Youngmee and Roger following. Blythe first asks if Blythe will get bench-pressed, and when Mo says no, Blythe becomes more relaxed about getting to enjoy a peaceful weekend, though she then endures a long, tight hug from Mo that leaves Blythe dizzy. Roger walks over to Mo claiming to have kept himself noncompetitive, but they both start claiming that they've stayed away from contests for longer. As Roger gets particularly worked up, he starts meditating, only for Mo to meditate harder, and the two become increasingly aggressive in their meditation. Youngmee, seeing all of this, tells Blythe it's time for her to iron her clothes and backs away rapidly, and Blythe calls her a coward.

The next morning, Roger and Mo find themselves in the kitchen at the same time, and they start competing in who can make a stack of pancakes the quickest while whistling the William Tell Overture. It ends with Mo finishing a stack while Roger has a single one land on his face. Blythe walks in to introduce Mo to her pet clothing line, but Mo presents her pancakes to Blythe before Blythe can finish speaking. Roger walks up and adds whipped cream to Mo's pancakes. As Blythe walks past and takes a seat, sarcastically talking about their new noncompetitiveness, Roger and Mo put the plate of pancakes on the table to Blythe together, though Roger decides to put his own pancake stack on top of Mo's, with Mo responding by pouring syrup. The two then get worked up again, adding increasingly nonsensical toppings to Blythe's breakfast until it's rendered inedible, with Blythe repeating her remarks about how they won't compete. Roger and Mo still cannot detect Blythe's sarcasm, and the two leave. Blythe tries her pancakes, only to realize it's better than she expected.

At the day camp, Sunil, about to showcase a magic trick, asks the audience, consisting of Vinnie and Russell, to predict things that will come out of his top hat. Vinnie predicts Sunil will find a harmonica, whereas Sunil believes there's a rabbit in there. Sunil reaches into the hat and finds a harmonica, and an excited Vinnie screams in joy. However, Sunil, noticing something else also in there, sees Buttercream, a rabbit, pop out of the hat, grab the harmonica, then hop off the stage and offscreen.

Blythe heads to the farmer's market, but passing by the kitchen, she sees Roger and Mo angrily glaring at each other. Having seen enough, she asks the two of them if they're competing over not competing, which both of them say yes. Blythe puts Sunil and Vinnie in a wagon to bring them over too, but they, too, are bickering over who has the better prediction skills. Nevertheless, Blythe, Sunil, and Vinnie notice Roger and Mo passing by, this playing a game of avoiding stepping on sidewalk cracks. They come across a stretch of sidewalk full of cracks under repair and stop in disbelief as Blythe goes out onto the road's shoulder and keeps going. Mo, accepting the challenges, deftly leaps from one piece of uncracked sidewalk to the next, making it to the end, then eggs Roger to do the same. He manages to do the same but steps on a crack after losing his balance. Conceding Mo the win, they play another round of the sidewalk crack game.

Blythe finds Sue and Jasper on the street, but she barely has enough time to tell them she's going to the farmer's market when Roger and Mo catch up to Blythe again. Roger greets Sue and Jasper, but when Mo sees it, she attempts to greet Sue and Jasper better, and it soon escalates into them directly fighting as Sue and Jasper walk off, confused and somewhat disturbed.

Blythe reaches the farmer's market and is impressed by the fresh produce all around her, but Vinnie feels disappointed to not see farmers for sale. Before long, Roger and Mo put themselves in an apple-juggling contest. Roger drops his apples first, causing Mo to taunt him by throwing her apples to him. Roger collides with Mo trying to deal with those apples, and the two break the apple cart, forcing Blythe to pay for the damages.

Blythe wheels Vinnie and Sunil, now surrounded by apples in the wagon, along with Roger and Mo, to the petting zoo. Along the way, Roger claims to be a "pet whisperer," with Mo saying so as well, though they both make inaccurate assessments of what the animals nearby want. Sunil and Vinnie both predict that neither of them will know what they're talking about, and naturally, both turn out to be correct. Roger and Mo then say that the llama wants to be ridden on, which infuriates Blythe, as Roger had promised earlier that he wouldn't make a scene. Roger pauses to think for a moment, decides it's Mo's fault, then runs over to try to ride the llama. Mo tries to stop him to get to the llama first, but Roger succeeds, riding the reluctant llama out of the petting zoo with Mo and Blythe pulling the wagon in pursuit.

Mo gets on Blythe's scooter, along with Vinnie and Sunil, to look for Roger. They eventually find him in the streets of Downtown City, but the llama proves too fast with there being too many obstacles. Roger soon regrets riding the llama, and he starts thinking about why particularly crazy things start happening when Mo is around. Meanwhile, Mo, worried about Roger's safety, asks Blythe why he keeps trying to outdo her at everything. Blythe directly calls her out, that she is partly responsible due to her trying to outdo him at everything. Mo realizes Blythe is right and takes her words to heart as Sunil and Vinnie start to find Roger and Mo predictable, making bets on them boring. Instead, Vinnie bets against Sunil that he can leap up and land back in the front basket of Blythe's scooter. After being battered by various objects, Vinnie turns out to be right.

Blythe catches up to Roger on the llama, but Roger and Mo are still unable to get along, with Mo insisting she ride the llama and Roger refusing. As a result, they are unable to get Roger off. The llama heads into a subway station, and Blythe, seeing the situation, drives her scooter down too. As she goes down the stairs, Vinnie says that he bets no one can get down the stairs faster. Sunil, interpreting that as a wager, begs to differ and leaps off the scooter and onto the llama.

Blythe asks for Mo to tell Roger to stop the llama, but Mo confesses that she's never tried to make Roger stop before. Blythe then gives her thoughts on the matter to Mo: That Roger attempts to compete with Mo not because he wants to prove himself better, but because he wants an older sibling's approval from Mo. With that in mind, Mo tries to ask for Roger to stop, but he refuses as he interprets it as admitting defeat, and with Sunil refusing to grab Vinnie's hand as he's too afraid to let go. Vinnie tries betting with Sunil that he won't grab Vinnie's hand, but Sunil decides not to bet anymore as he'd rather not know what his future will be. The llama goes up a building under construction and leaps off an upper floor, bringing the llama, Roger, and Sunil back into the petting zoo. The llama uses the impact to get Roger and Sunil off, and Roger and Sunil land into another apple cart, breaking it. Vinnie pulls Sunil out of the pile of apples and tells him that if Sunil won't predict anymore, Vinnie won't bet either.

Watching the llama at the petting zoo, Roger tells Mo that he regrets riding that llama and that Mo could've done it better. Mo starts acknowledging Roger when Blythe quickly puts her back on track, Mo telling Roger that she's relieved Roger is unharmed. Mo then says that, unlike herself, Roger has raised an impressive daughter. With Roger agreeing, Blythe comments that she's glad the two finally agree on something, and the two call a lifelong truce. It doesn't last for long for Mo though, as she challenges Roger to a race home and starts running. Roger readies himself but realizes to simply stay put. Blythe asks if Roger is burning with the urge to race Mo, and when Roger says that he does, Blythe puts Roger in her scooter's sidecar and zooms back down the road Mo is running on.