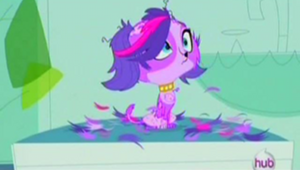 "I used to give fabulous makeovers to my dolls all the time, and they looked pretty awesome."note Blythe says this to Mrs. Twombly with memories of styling her dolls' hair to look gorgeous. At the end of Act 1, she remembers what she truly did to her dolls, with those same words overlaid as narration.
Written by Roger Eschbacher

Blythe steps into The Littlest Pet Shop to hear Mrs. Twombly speak to Raul over the phone that he has to call in sick. Overhearing the conversation, Blythe volunteers to step in as a substitute groomer—she has never done any actual grooming work, but she has worked with her dolls' hair when she was younger and proud of it. With no one else to turn to, Mrs. Twombly accepts Blythe and tells her that there is only one client, but a whopper of one: Zoe Trent.

Later, an art critic named Morgan Payne stops by to stock up on pet supplies. He rants to Mrs. Twombly about the sorry state of the art world when he marvels at paint splotches on the windows of the day camp room. Mrs. Twombly tells him that it's the work of Minka, and he leaves with his soul rejuvenated. Minka hears what's going on and dreams of stardom in the fine arts.

Blythe steps into the day camp room and informs Zoe that she will groom her. Zoe immediately asks if Blythe has any grooming experience. Blythe says no, to Zoe's dread.

With Minka being the new center of attention among the pets, everyone starts trying to discern the meaning of her window splotches. They argue and bicker over it as Minka retreats elsewhere and quietly says that she only did it for fun.

In another room, Blythe gets to work trimming Zoe's fur. She gets so into it that she drifts off into a rapid-fire monologue and cuts off far more from Zoe than she should have, leaving extremely uneven fur and even some bare spots of skin. It is then that Blythe remembers what she really did to her dolls, having ruined their appearance in much the same way as she did Zoe. Adding to Blythe's worry is that Zoe's owners are going to bring her to a dog show that afternoon, Zoe unable to see how "beautiful" Blythe has made her. Zoe goes looking for a mirror, and Blythe has to stop her.

Russell has taken up the spot of Minka's agent for her art career, but before he can say anything much, all of the other pets gather by the armchair for a meeting. They decide that Minka will need to produce a lot more artwork to become a success, and they push her into higher productivity. Minka quickly cracks under pressure, and she is unable to create anything.

Zoe eventually finds a mirror, and despite Blythe lunging at her to grab it away, Zoe sees herself anyway and howls in shock. Blythe apologizes profusely, but Zoe faints. Mrs. Twombly hears the howling and comes over, so Blythe wraps Zoe in blankets and passes her off as getting a spa treatment. Zoe wakes up and, figuring what's going on, tells Blythe that it'd be easier if Blythe just admitted to Mrs. Twombly. Blythe says she'll think of something.

Minka is still stuck in front of the canvas painting at nothing in particular, having mentally shut down. Despite attempts by the other pets to divert her attention, nothing seems to work. Pepper sees Blythe run by and asks for her help, but Blythe says she's too busy and goes back into the grooming room. After several attempts to hide the results of Blythe's grooming, she eventually creates a holographic projector from junk in the closet. Unfortunately, it only works on that one location.

Even tossing things at Minka does not cause her to budge. Penny proposes that they got too caught up with trying to ride on Minka's coattails of potential fame that they never thought if Minka might not want to be famous. Russell confronts Minka alone and tells her to forget about what anyone else says and just do her art as she sees fit and at her own pace. This gets through to Minka, and she snaps out of her catatonia.

John and Clarissa, Zoe's owners, arrive at The Littlest Pet Shop and ask to see Zoe. Minka, back to normal, sees Zoe's condition, as well as John and Clarissa coming in to pick up Zoe, and dashes off. Minka brings in purple, lavender, and pink paints and makes a quick fix to Zoe's appearance, and she looks better than ever. The overjoyed couple take Zoe to the dog show as Blythe tells Minka that it's weird she didn't get in trouble. At the dog show, Zoe takes 1st place, but as the judge pets Zoe on the head, the paint gets stuck to her hand. Zoe sneezes, removing the rest of the paint from her body, and Zoe winds up looking dreadful again as John faints into Clarissa's hands.