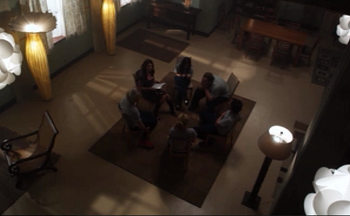 Hello, my name is...
Advertisement:

Jack Hurley, a big man drives down the road eating and bouncing to a song in a good mood until he gets to his office, where he finds investigators going through his files, and runs out in a panic. At the Leverage office, Michelle, the manager of a food bank is telling them about donation money she’d given Hurley to manage, but they went missing.

Looking into him, Nate figures that he’s an addict and he’s under pressure, which means he won’t have gone too far.

Eliot and Hardison track him down at a bar but a group of thugs arrive and start beating up on him until Eliot intervenes. Hurley bolts. He doesn’t get too far before he gets into an accident. He’s asleep and they need to decide what to do with him.

Eliot and Hardison track down his car, which is a mess. Eliot determines that the seat is set wrong for someone Jack’s size. Someone’s been in it, and set a bomb. Fortunately, it’s tied to the computer, so Hardison is able to disable it.

As soon as they do, the Mexican thugs from before show up, followed by Korean thugs they’ve never seen before. They both begin demanding their money from the pair, the Koreans pointing their guns at them, the Mexicans aiming at the Koreans…and Eliot threatening to blow everyone up with the bomb. The gangs back down, muttering about not messing with Chileans.

Hurley has been ripping off more than charities, and since their current leads have turned up dead ends, they need to check his acquaintances. In another group session, Sophie has Jack make a list of all the people he’s hurt with his habits. Meanwhile, Eliot and Hardison talk to a girl from the bar that Jack seemed to have been harassing, but it turns out he’d bought her a car.

Jack calls his assistant who is at his office where the Koreans are looking for him. They overhear where he is.

Nate is getting fed up with being cooped up in the center and tries to go over the wall to get a drink. Sophie talks to him about it, even though he insists he doesn’t have a problem or need help. After she leaves, he hears Sterling talking about how the company would cover his treatment, with a small deductible. Nate swing at him…and puts a hole in the wall. Sterling was never there.

The hallucination continues to taunt him, putting a drink in front of him. Nate continues to brood on it, watching Jack get along with the others, until he takes him and starts forcing information out of him. He admits that he did take money from a charity, but he was thinking that with what he knows, he could quadruple it.

Parker comes in with a gun she lifted from one of the Koreans. They need to get out of there now. Nate shoots the lock on the window and off they go. After they leave, Nate takes him to a taco stand, and they form a plan.

The next day, Jack and the gangs meet so he can show them where the money is. When he gets in his car, he sets off another bomb. The gangs figure either the Chileans or Jamaicans must have done it and decide to get out of dodge.

Jack comes out, not quite sure what happened. The team had pulled him out just before the explosion. He in turn shows them where the money is, in the tires.

With the money returned, Jack is given a new identity since he is technically dead now. Once they get Parker out, they call all get on to their next case.