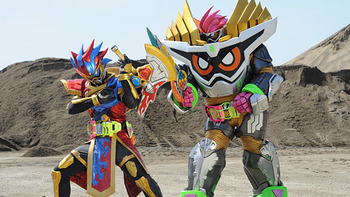 I got this. I can do this. This world can't beat me: I will survive!

Ex-Aid, Brave, and Snipe have all been defeated at the hands of Kamen Rider Para-DX Level 99! Also, Parado begins to manipulate Emu's body as his own in order to retain the infection. Much to the other Rider's surprise, Poppy brings out another Proto Mighty Action X Gashat and a Gamer Driver! Poppy had found them thanks to her revived memories of a young Kuroto. What is the meaning behind this Gashat?! Poppy manages to use the power of Level 0, in the hopes of bringing Emu back to normal...