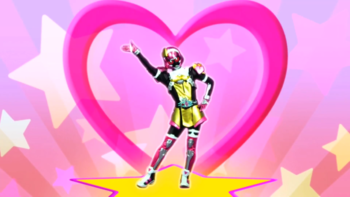 Listen to the heartbeat of love!

Kamen Rider Chronicle has already begun! Para-DX has joined the game and defeated the first round of the general players, giving them a Game Over before Emu watched them disappear before him. Kamen Rider Chronicle is being sold at an extremely fast rate, which catches the attention of the Ministry of Health. To avoid any form of confusion, Kyotaro Hinata orders a temporary halt on the actions of the doctors in the CR. However, a game disease patient escapes from the CR in an attempt to cure his own game disease, which leads Emu to chase after him. Then suddenly, Poppy Pipopapo appears before them with a new driver and a Rider Gashat of her own...