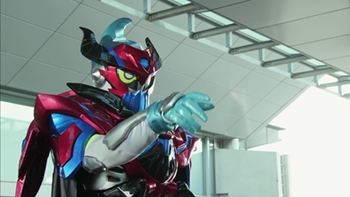 Kuroto reveals to Emu that he was the first Bugster virus patient in the world, causing his infection to flare into a massive orange eruption of digitization; Parado tosses a laughing Kuroto to the ground and disappears.

Emu wakes up in CR's patient bed with a headache; Taiga and Hiiro separately wonder why no Bugster appeared from Emu. While Hiiro, Poppy, and Director Kagami discuss the situation upstairs, Emu appears and says he's fine, but is in full "Genius Gamer M" personality despite not playing any games. At his hideout, Kuroto is frustrated that Emu's game illness flaring didn't erase him, but focuses on gathering the data of the remaining 6 Gashat games' Bugsters to complete Kamen Rider Chronicle.

At the Takinoryuu School of Buyou Dancing, Mai Yamato is having a poor practice session, but a Bugster infection flares within her, the Bugster taking control of her body without breaking out, making her dance the Robot. Meanwhile, "M" is playing Poppy's DoReMiFa Beat arcade machine, controlling Poppy herself as the dancing character much to her annoyance; Hiiro suspects Emu's total personality change is a result of a Bugster's control. A game illness alert sounds, and "M" excitedly goes to respond, calling fighting the Bugsters "a game"; Hiiro and Poppy-turned-Asuna race after him. They find Mai under a roadway bridge, the Game Scope showing a full-body image of the Bugster inside her instead of just an icon. Seeing them, the Bugster overtakes Mai's body with its own form as the Level 30 Gatton Bugster; "M" recognizes Gatton as the final boss of Gekitotsu Robots and transforms to Ex-Aid Robot Action Gamer Level 3, his eyes flashing red in the process. The power difference between Levels 3 and 30 is readily apparent, but Ex-Aid uses both Iron-Body and Muscular Energy Items to beat Gatton back. Gatton enters sleep mode and retreats back into Mai, but Ex-Aid wants to keep fighting; Asuna has to cancel his transformation to make him settle down.

Back at CR, Hiiro tries to diagnose Emu's infection, but the Game Scope's readout only glitches his image. "M" plays a gamepad, brushing off caring for the patient when there's no Bugster to fight. Hiiro grabs his collar and tells him to return to normal, causing him to collapse with a headache. Sidelining Emu for his condition and taking the Mighty Action X Gashat, Hiiro goes to copy Emu's normal actions by talking to the patient, saying he can do anything "the intern" can. At Taiga's clinic, Nico ponders if she only lost to Emu's Bugster, while Taiga explains he's after all the Gashats so he can destroy all the Bugsters alone. As "M" continues controlling Poppy in DoReMiFa Beat, Mai explains that she was stressed by being unsure she was worthy as the face of the Takinoryuu School for a buyou dance performance tomorrow; Hiiro says that worthy or not, her resolve is weak, and she must overcome her stress herself. However, Gatton resurfaces and teleports out of CR.

Hiiro catches up with the Bugster outside the performance hall and prepares to use Mighty Action X, but "M" snatches it back from him and transforms to Ex-Aid Action Gamer Level 2, attacking with the Gashacon Breaker. Genm Zombie Gamer Level X quickly joins, and Ex-Aid loses his weapon. Genm uses the Gashat Gear Dual β to summon the Fantasy Gamer, but Hiiro jumps in and snatches Mighty Action X back again out of Ex-Aid's Driver to draw Genm's attention; the Fantasy Gamer chases Hiiro to get the Gashat, but Hiiro tricks it into running into a Confusion Energy Item, making it attack Genm, disappearing as he drops the Gashat Gear Dual β. Hiiro grabs the Gear Dual β and, despite Genm's warning that Level 50 is too much for him to handle, transforms into Brave Fantasy Gamer Level 50. Taddle Fantasy's Demon King's power takes control of Brave, and he summons a swarm of Bugster Virus monks to attack Ex-Aid and Asuna; however, Hiiro fights back, using his resolve to fulfill his duty and be the world's best doctor, fit to save everyone, to overcome the game's influence. His speech causes Emu's game illness to subside, and he untransforms and reverts to his normal personality. Brave turns his Virus monks against Gatton and Genm, and uses the Demon Lord's telekinesis to toss Gatton around. Genm summons the Gashacon Sparrow and Gashacon Sword, but Brave uses energy shields and pulses, teleportation, turning his cape into a drill, and firing Virus monks from a portal to fight his opponents back. Genm uses Taddle Quest in the Sword and Drago Knight Hunter Z in the Sparrow to summon a flaming Hunter Gamer Bugster Union for a Taddle Drago Knight Critical Finish, but Brave counters with Taddle Critical Slash, destroying the Hunter Union and hitting Genm and Gatton; Genm drops Taddle Quest and Drago Knight Hunter Z, and Gatton is destroyed, freeing and curing Mai. Brave retrieves the dropped Gashats as Genm collects Gatton's debris with the Gashacon Bugvisor, retreating. Hiiro untransforms and hides a pain in his chest, but a watching Taiga notices; Mai has been inspired by Hiiro's strength and invites him to her performance, but he reiterates he stays uninvolved with patients' lives, walking away as his chest pains him again. Emu apologizes and is returned Mighty Action X; from a distance, Parado welcomes him back.