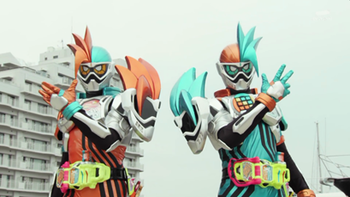 The two Ex-Aid halves from the previous Episode immediately do not get along, and are revealed to be Emu's two personalities: His polite Intern self and the Genius Gamer "M." M wants to fight Genm, the other wants to handle the patient's virus first. Their in-fighting allows Genm and Aranbura to retreat. The surgeon patient Kazuki Shirakawa continues to shoo away attempts to treat him, telling Emu that as a surgeon he doesn't think his happiness is a burden Emu should bear. As the two converse, Poppy and Hiiro discuss the aftermath of the forest-fight, seeing Emu fall unconscious after the Intern side of the Mighty Brothers un-does the transformation; both of them are at a loss to explain it. Nico Saiba makes her way to Taiga's unofficial clinic once more, again implying that she has knowledge about Emu. A tidbit that she lets slip is the implication that Emu wasn't anywhere near as kind as he is currently....

On the rooftop of the hospital, Emu and Hiiro debate whether or not to operate on the patient's cancer. Hiiro interjects that they shouldn't operate if the patient doesn't want them to. Emu however reveals that he noticed the Aranbura Bugster targeting him specifically. If Dr. Shirakawa really didn't want to be operated on, why would the Bugster only target Hiiro? To stress him out! The Bugster knows that if a well-reputed surgeon like Hiiro was gone, Kazuki would be stressed out once hs last hope would be extinguished. Hiiro is still hesitant until Emu calls his bluff and says that Hiiro is "too scared" to perform the operation, knowing his reputation is at stake. Emu shows that he trusts Hiiro's surgeon skills and trusts his own gaming abilities. Emu's statements appealing to his pride, Hiiro confronts Shirakawa with this newfound knowledge; saying that the operation is ultimately up to him.

Later, the Aranbura Bugster attacks Seito Hospital in an attempt to draw Hiiro out. Emu intercepts him instead, revealing that the surgery is going through after all; transforming into Ex-Aid (Having received his Gashats back off-screen) to combat the Bugster. Thus, Shirakawa's surgery and the Bugster extraction begin simultaneously, the battle moving to an airport. Ex-Aid and the Aranbura Bugster are evenly-matched until Ex-Aid uses the Bakusou Bike Gahat to summon a lifeless version of Bike Gamer Level 2, ramming the enemy with its Critical Strike. The attack is interrupted by the arrival of Kuroto Dan, who, after mocking Ex-Aid for using Bakusou Bike, transforms into Zombie Gamer Level X. The combined onslaught of Genm and the Bugster force Ex-Aid out of his transformation. (Nico and Taiga also arrive on-scene, and watch tbe battle unfold discreetly.) Ex-Aid is finally fed up, and transforms into Mighty Brothers XX. The doctor side of MB attacks the Aranbura Bugster while M targets Genm immediately. The two halves of Ex-Aid pass along the Gashacon Key Slasher as the battle goes on, culminating in a Mighty Brothers Critical Strike that destroys Aranbura yet again....or so they expected. As the Bugster fades away, Genm absorbs the Bugster's data into his Gashacon Bugvisor, gloating about changing the "grand destiny" before he flees.

Emu un-does the transformation, falling unconscious yet again. Taiga collects blood from Emu's wounded face before returning to his clinic. The surgery is also revealed to be a success. Analyzing the DNA sample from the blood, Taiga notices that Emu's DNA matches that of the Bugster....