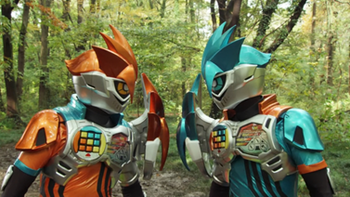 Now that Lazer is dead and Kuroto has the data he needs, the Kamen Riders have outlived their usefulness and Kuroto plans on taking their Gashats back. Parad is also waiting for a completed Gashat of his own. Meanwhile, a famed surgeon finds himself afflicted by game disease; his Bugster is targetting Hiro specifically. The Riders engage the Bugster until Kuroto arrives and becomes Zombie Gamer Level X. Still reeling over Kiriya's death, Emu activates Drago Knight Hunter and attacks him desperately, ignoring the Bugster and Hirro's struggle. Genm triggers Critical Dead, forcing Hiro to save Emu and retreat before they are killed in an explosion. Emu has a crisis of conscience as a result, forcing Hiro to confiscate his Gashats until his head clears. The mysterious woman "Nico Saiba" visits Taiga again, anxious for him to defeat the Genius Gamer M.

Parado and Kuroto discuss the blank Gashat, with Kuroto revealing that any Rider that attempts to use it as-is will receive a lethal dose of the Bugster virus and die immediately. In order for it's data to be gathered however, it needs to be added into a Bugster host. He also states that until "Kamen Rider Chronicle" is finished, he intends to remain in hiding. After this conversation, the paitient reveals to Emu that not only do they have the Game Disease, but terminal pancreatic cancer as well. This makes Emu's indecisiveness worse. As he sits outside sulking, Parad finally act on his interest in Emu and talks to him for the first time, contrasting the totality of human death to the infinite lives of video games. This makes Emu recognize him as the fake Genm from Episode 7, re-affirming his intent on not letting anyone else die, despite how hopeless it seems. Intrigued by Emu's resolve, Parad gives Emu his blank Gashat, telling him to "enjoy the game" before running off.

In the forest, Kamen Riders Brave and Snipe are both helpless against Genm and Aranbura's combined might. As they are defeated, Emu arrives on-scene and inserts the Blank Gashat into his Gamer Driver. He is infused wwith the Bugster Virus, but doesn't die. The cloud of viral data instead recedes into his body, causing the Blank Gashat to fill with the data it needs. As everyone stares in awe, Emu uses the now-complete Gashat, transforming into Mighty Brothers XX Level 10. The form is more than a match for Zombie Gamer.

The Episode ends with both halves looking at each other in bewilderment.