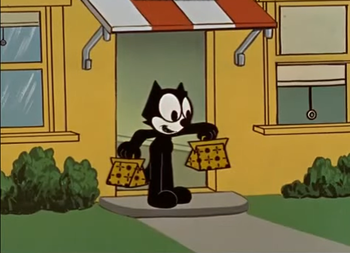 Felix is walking by the Professor's lab with his Magic Bag of Tricks as Rock Bottom spies on him through the window. Rock zips ahead of him, and Felix notices he's spying the bag, so he runs back to his house. Rock walks around, wondering how he can get the Magic Bag so he can be a bigshot and upstage Professor. Felix decides to play a trick on Rock, and plants a fake Magic Bag on his doorstep.

Rock shows up with a fake Magic Bag of his own, as does the Professor! Both see the phony bags, as Felix decides no one wanted a phony. Rock decides he's not going to give up so easily, so he dresses as a salesman with a portable closet, which he carries on his head, and then presents to Felix, "in which to keep your bags and thing". "Great!" Felix says. "Now I can keep my Magic Bag in there". He then goes inside, but then Rock takes off , as Felix notices.

When part two starts, Felix chases the dog in the closet, commanding it to bring back his magic bag (as if thinking that the closet was itself magical and cursed). Rock comes out the closet, now holding the bag, but the dog then walsk by a fence where the Professor pulls a stick, and grabs "Rock's bag", so the cigar chomping crook notes he's got to trick the Professor, so we now see the mad scientist where a salesman approchaes him.,The salesman points out that he's checking bags. "So give me YOURS". Of course, it's Rock, in that aforementioned disguise, and the Professor notes it.."don't try you disguises on me again!" Rock, sarcastically complying, runs to the Professor, and the two fight, bag the bag falls out, with Felix now seeing it. The two chase the bag past Felix, cornering it thru a fence by a building. Felix, catching up, commands:"Open". He then turns it into a cannon. It blows the crooks into the air. Professor:"That Felix". "That Felix" laughs.