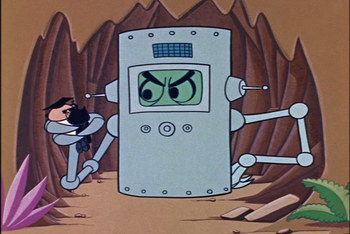 "Who am I? I'm the Master Cylinder, King of the Moon! And I hate intruders!"

Master Cylinder, King of the Moon is the 29th episode of the Joe Oriolo Felix the Cat cartoons, aired in 1959.

The episode starts with Felix and Poindexter leaving the moon in Poinsy's flying saucer, planning to head back home. Back on Earth, Professor is monitoring their activity and is pleased that they're heading back—only for a strange beam of light to shoot out of a crater in the moon, pulling the flying saucer right back into it. Felix and Poindexter realize whats going on and brace for a crash landing inside the crater. Fortunately, the ship lands safely, and Felix and Poindexter step outside, finding out that not only does the inside of the moon have a breathable atmosphere, it has a full blown ecosystem in it, a jungle thriving with plantlife. Professor, still watching whats going on, is worried about Felix and Poindexter being dragged inside the crater, decides to go rescue them. Back on the moon, Poindexter points out to Felix that they aren't alone on the moon, with big footprints going into the jungle. Felix looks ahead and sees a big, lanky insect alien in front of them. Poindexter urges Felix to go greet him, and Felix reluctantly accepts. Felix tries to shake hands with it, but the insect picks him up and smooches him on the cheek. Remarking that its a giant kissing bug, Felix gets annoyed and tells Poindexter to make it stop. Poinsy urges the bug to stop, so it throws Felix aside and turns its attention to the kid, grabbing him and smooching him on the cheek.

Just then, a giant, metallic claw emerges from the brush of the jungle. The insect suddenly gets scared and flees, and Felix and Poindexter make a break for it as the claw reaches for them. They both hide in a cave, with Felix wondering what the thing is, and they stop it from grabbing them by stuffing corks on the tips of its claws. All while this is going on, Professor is making his way to the moon in his rocketship, putting up a “NO RIDERS” sign on the front window as he passes by an alien hitchhiker. Inexplicably, he also has to stop for a hot air balloon that is drifting in the middle of space (“Sunday flyer!”, Professor grouchily remarks) before moving on. Meanwhile, the robotic claw continues trying to catch Felix and Poinsy as they go deeper into the cave. They end up cornered as the claw finally catches both of them, pulling them outside.

Meanwhile, Professor has almost arrived at the moon, and begins to search for the crater that Felix and Poindexter went into. Back on the moon, the mysterious claw carries Felix and Poinsy to its lair, revealing its true form—that of a giant, robotic cylinder. While this is going on, Professor finds the crater and nosedives his spaceship right inside of it. Back inside the crater, Felix asks the robot who he is. The machine introduces itself as the Master Cylinder, King of the Moon, and that he hates intruders. Felix begs him to let them go home, and Cylinder thinks for a moment. While he's taking his time, Poinsy tells Felix to press a button on his labcoat with his nose once he gives the signal. Cylinder then makes up his mind—he'll send them both home, but in little pieces. Poindexter says “Now!” and Felix pushes the button, which suddenly short circuits Master Cylinder, making his claw go limp and releasing them. Felix asks how that worked, and Poindexter explains its a Force Ray Generator that paralyzed Cylinder's antenna. Poindexter urges Felix that they get back to the flying saucer right away, before the batteries on his device quickly drain. They make it back to the saucer, just in time for Master Cylinder to turn back on and readjust himself. The hatch on the saucer closes, but Master Cylinder catches it with a giant magnet, forcing the hatch open and grabbing Felix and Poindexter, dragging them back to him.

Just then, Professor finally shows up and demands to know whats going on. Master Cylinder acts surprised at his presence, dropping Felix and Poindexter. Felix tries to warn Professor, but Cylinder grabs him and brings him up to his face. Cylinder then greets Professor as an old friend, remarking that he was his favorite instructor at the space academy. Professor recognizes his voice, and Cylinder reminds him that he was his most promising pupil. Professor finally remembers him—and that he flunked chemistry, and that he always blew himself up. Cylinder recalls that very thing was what cost him his original body, but that nothing could destroy his magnificent brain. Professor orders him to put him down and release his nephew (and Felix), and he complies to the former. Cylinder allows Professor and Poindexter to leave, but refuses to release Felix, who he wants to use in his experiments. Professor agrees, much to Poindexter's fears. Fortunately, Felix notices a cord near the bottom of Master Cylinder, plugged right into a nearby wall socket. Felix immediately unplugs it, which shuts down the cyborg on the spot. Free of him, Professor urges Poindexter to come along, and reluctantly allows Felix to come with them. Felix gives an annoyed thanks. Professor ties Poindexter's saucer to his rocketship, and they take off from the moon, heading straight back to earth as the film irises out.