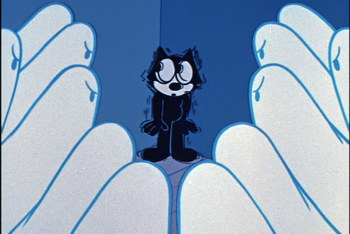 On a foggy day out in the ocean, Felix is fishing from a raft while Professor spies on him from a pirate ship. He gets flustered about how he's spent years trying to catch him, and sets up his ship all by himself to go after the cat. The ship rams into Felix's raft head on, knocking him onto the boat. Felix begins investigating the seemingly empty ship, but falls into the ships cargo hold. He notices a box nearby that says "Do not open before midnight!" and turns a nearby grandfather clock up to midnight, instantly making it nighttime. Felix opens the box, and out of it comes a parade of ghosts. Felix is amused at the sight of this and sits down on an armchair, only for the cloth on it to turn out to be a ghost, who proceeds to throw Felix around the room with the other ghosts. Felix slams into a door, and a ghost peeks its head out to shush him. Felix notices the door says Ship's Concert and peeks through the keyhole, seeing a ghost conductor conducting a silent orchestra of ghosts. He investigates and tries to ask the conductor why there's no noise, but he merely shushes him again. Felix notices a ghost sleeping nearby with a triange in hand, and Felix gives it a few taps. This angers the conductor and the rest of the ghost orchestra, and they group together to gang up on Felix. Felix leaps into a nearby barrel, but is thrown out by the ghosts and is cornered by them.

The ghosts grab Felix and start carrying him away, but Felix grabs a chandelier to escape them and runs off. He tries to go through a door, but encounters a skeleton with maracas in his way. Felix tries to jump out the nearby porthole, but a shark is waiting for him outside and almost eats him. Felix tries to open another door, but immediately finds the ghosts waiting for him there, and they give chase. Felix crashes through a door into the ships kitchen, and the ghosts pop up of the stove he's stuck in. The ghosts almost capture Felix, but he crawls away from them—or tries, since the ghosts quickly crawl after him as well. Just then, Felix runs into Professor, who is dressed up like one of the ghosts and is revealed to be in charge of them. Felix runs away under the ghosts, who form a spanking machine line and spank Felix when he passes through them. Professor winds up on the other side, and Felix turns around and runs through the spanking line again, only for Professor to catch him in a butterfly net. Professor throws him into a trampoline formed by the ghosts, who toss him into another part of the ship, where Felix tries to hide in a drawer. Professor pops up and searches for him, but pulls on one of the drawers too hard and sends himself flying through the nearby door. Felix runs through the opening, but Professor catches him in the net and throws him on the ghost trampoline again, with it sending him up to the ships crows nest this time. A ghost elephant pops out of it and scares Felix, making him fall back down into the ships cargo hold and into a barrel of flour. Felix appears to the other ghosts covered in the flour, which makes them think he's a ghost and scares them all off of the boat. Professor isn't fooled and tries to grab Felix, but one of the ghosts grabs him in turn and drags him off into the water, with Professor getting flustered as the ship sails off without him. Felix brushes himself off, and says "Righty-O!" and laughs as the cartoon irises out.