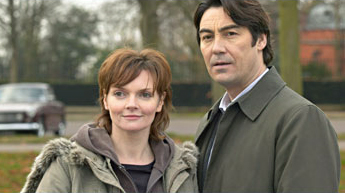 'Til Cruel Twist Ending do us part.
Havers: I've never been married. I've never had anything you could call a relationship.... [so] you find something else that gives you the reason to get up in the morning. And I have that, don't I?
Lynley: We both do. [Long Held Gaze follows.]

The body of a young, middle-Eastern man is found in a frozen meat truck. With a false passport and no other ID, Lynley and Havers are hard-pressed to find out who he was, and why he was killed and put in a meat truck. As they wait for the autopsy results, the only clue to go on with is a vellum manuscript in ancient Arabic that was found on the man, which appears to be a page from the Koran.

In the meantime, Lynley reaches a crisis in his personal life, and his foul mood gets in the way of his work. Havers does her best to keep him under control, but with mixed success. Will the investigation take too heavy a toll on Lynley? And more importantly, how much will it cost them both in the end?