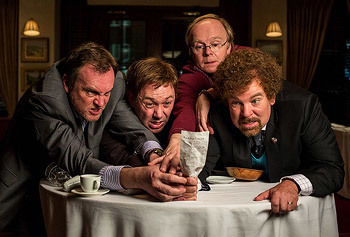 Archie, Kevin and Malcolm, teammates from a badminton club, have taken Archie's friend Craig out to dinner whilst he is visiting on a business trip. The bill proves to be much more expensive than the men expected. The wealthy Craig offers to pick up the tab, but Archie and Malcolm each insist on paying, and soon get into a very heated argument over who gets to pay. It becomes clear that there are past tensions between them, and the situation escalates when Archie lies that he has a terminal illness so that Malcolm will let him pay. Craig and Kevin try to break up the argument, but this only makes matters worse: Craig is accused of showing off his money, while Archie and Malcolm resent Kevin's stingy attitude.

The waitress, Anya, is anxious because she was supposed to have closed the restaurant by now. Malcolm proposes they settle the discussion with a "game" where he and Archie will compete to see who can stab a knife into the table all around their hand and back the fastest; the winner gets to pay. The game becomes increasingly tense as Archie repeatedly stabs himself but carries on anyway. Craig tries to grab the knife but accidentally stabs Anya in the throat; she dies. The men discuss what to do, and Archie calls a criminal contact who can send a professional "cleaner" to take care of the body. However, they will charge £200,000 - which only Craig can afford. Craig reluctantly agrees to arrange the payment.

When Craig accidentally steps on Anya's corpse, she screams and he realizes she is still alive. The other men are forced to admit that the entire evening is a scam set up to con him out of £200,000. Kevin demands Craig's phone so he can't call the police. Craig refuses, but realizes he is locked in, and the others smile at him malevolently. Some time later, the men repeat the same scheme at the same restaurant with a new mark; Craig has taken Anya's place as the "waiter."