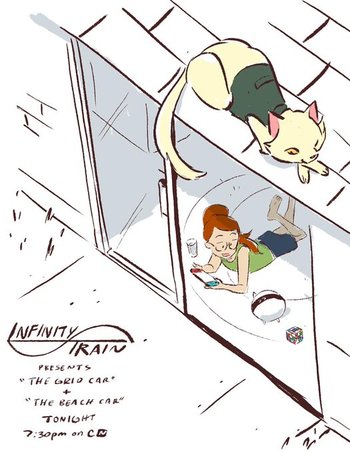 Over the course of several train cars, Tulip has been growing more and more frustrated by One-One's "help", with his alternating absent-minded behavior and pessimistic attitude complicating every trial they've faced. When trying to remind him that her situation onboard the train isn't a game, explaining her work ethic to the robot, Tulip discovers that the number on her hand has gone down from 115 to 114. She starts to panic, not helped by One-One seemingly confirming that once the the number reaches zero, she will die. In desperation and anger, she picks up One-One and races towards the next car.

The new car is home to a beach location, where Tulip takes some time to observe a talking cat from afar, watching the feline con a sentient blob of water named Randall into buying an ordinary pipe under the guise of it being a "doughnut holer". To further convince the water blob of her pyramid scheme, the cat claims that the pipe was certified by her "close acquaintance", the Conductor, prompting Tulip to run over and ask for help getting home. The cat first eases Tulip's concerns about death, pointing out One-One's questionable intelligence, before agreeing to help her in exchange for the robot and Tulip fixing her transportation device.

After fixing the shuttle-craft, Tulip starts to feel guilty about letting the cat take her companion, with Randall's poor attempts to sell her the "doughnut holer" making her realize that she gave away a "teammate" out of selfish desperation and fear. Realizing that she must correct her mistake, Tulip bargains with Randall to take her to the cat in exchange for buying the pipe. They give chase, and Tulip is able to recover One-One after Randall destroys the vehicle, with the feline threatening Tulip in response and leaving in a huff. Tulip apologizes to One-One, admitting that she has come to consider him as both a teammate and a friend, and One-One forgives her.