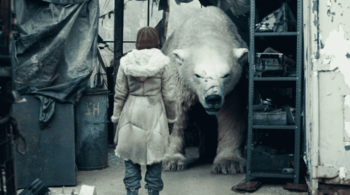 Texan aeronaut Lee Scoresby and his daemon Hester travel to Trollesund in the Far North seeking Iorek Byrnison, a disgraced armoured bear. Trollesund's Magisterium citizens stole his armour several years earlier, forcing him to work as an indentured worker. Lyra and the Gyptians also sail to Trollesund to search for the kidnapped children. Farder Coram contacts his former lover, a witch named Serafina Pekkala. Her daemon, Kaisa, promises that Serafina will help the Gyptians. Though the Gyptian elders believe Iorek is untrustworthy, Lyra and Pan join forces with Scoresby and Hester to enlist Iorek's help in finding the kidnapped children. With Lyra's assistance, Iorek recovers his armour locked inside a Magisterium church. Iorek, Scoresby and Hester join forces with Lyra and the Gyptians as they continue travelling north. Meanwhile, a Magisterium priest attempts to replace Mrs Coulter as head of the Gobblers with Father Macphail. However, she blackmails him by revealing that Lord Asriel is being held prisoner by Iofur Raknison, the king of the armoured bears. She offers to give Asriel to the Magisterium in exchange for continuing her experiments and asking a question of the alethiometer ("Who is Lyra Belacqua?"). Travelling north, she meets with Iofur, offering him a baptism and induction into the Magisterium in exchange for working with her.