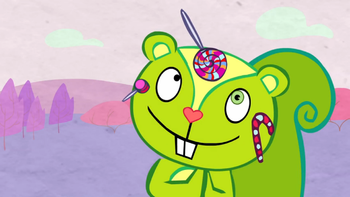 "Wash behind your ears!"

"Nuttin' Wrong with Candy" is the seventh episode of the first (internet) season of Happy Tree Friends.

A sweets-loving squirrel (Nutty) begins to snack on a lollipop that was attached to his head. The sugar rush causes him to laugh and jitter, dropping the rest of sweets attached to him to the ground. In need of more sweets, he comes across a vending machine filled with candy bars. He tries to use it, but the candy bar ends up getting stuck, so he attempts to pick it up by inserting his hand from the dispenser slot, only to tear his arm off. He begins to lose his mind and then starts to rock the vending machine as a last resort. The machine falls down onto him, causing broken glass shards to get stuck on his face. On the bright side, he ends up getting the candy he wanted, but on the other side, the coils then activate and rip him apart.