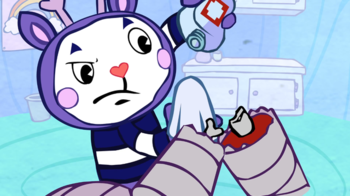 "Mime and Mime Again" is the seventeenth episode of the first (internet) season of Happy Tree Friends.

Mime tries to entertain a hospitalized Toothy. He starts by showing off his balloon animal before juggling three colorful balls. He then pretends to perform a snake charm on a bandage on one of Toothy's legs. Suddenly, that bandage gets caught in a nearby desk fan, pulling the beaver's leg. This results in his leg being snapped in two. The deer looks back to see the horror and begins to hastily treat the injury with some alcohol only to accidentally spill a lot of it when he is trying to pour it from its container. Toothy cries harder from the agonizing pain, so the entertainer ends up doing the quick method of putting the displaced leg back at its place, which somehow works, making Toothy feel relieved. The deer then turns on the (somehow off) fan back again, but he forgot the bandage still stuck on the blades, causing it to suck poor Toothy in and shredding him into pieces. Upon seeing the mess the deer created, he begins to pull an invisible rope trick to leave the scene. Toothy's severed arm is then seen sliding down the wall.