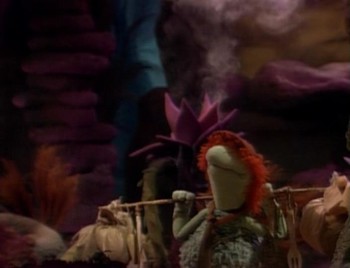 Alone at last!
Tired of the noise and hustle-and-bustle at Fraggle Rock, Boober moves to the Caves of Boredom to live a quiet and secluded lifestyle. However, after a visit to the Storyteller, Gobo, Red, and Mokey realize the caves have another name: the Caves of Forgetfulness, because those who stay there forget who they are. What's more, the caves are full of plants that entwine and kill anyone who stays there long enough. (There would be warning signs if anyone remembered to put them up.) They go to save Boober—and Wembley, who's visiting him—but they forget what they're doing upon arrival. Boober manages to remember everything and help his friends escape, deciding Fraggle Rock isn't such a bad place after all.