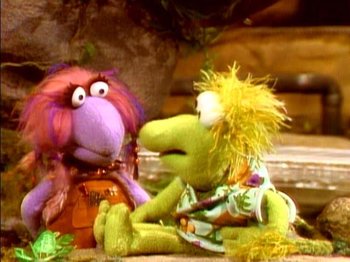 ♫ How could anyone love a wimp? ♫
Meeting Lou convinces Wembley and Company that the little green Fraggle is in love. Wanting to make sure she returns the feeling, Mokey and Wembley visit the Trash Heap who gives them a love potion. On their journey home, the two Fraggles get stopped by Junior, Wembley uses the potion on him and get thrown down the well, dropping the potion and infecting everyone. The effects are luckily temporary, and after Lou show up, Wembley tells his friends he's going to spend time with her.