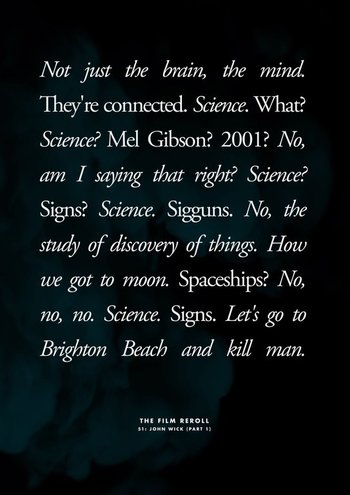 Kuzma and Iosef, getting a bit Metaphorgotten. note  Caption by m_busittil.

Things are going well for the steadily rising Tarasov crime family. Viggo Tarasov has just bought out one of his greatest rivals — the Stevenson family — and acquired their hotel, the Old Queen Bess. Meanwhile, his son Iosef has started making a name for himself, committing his first proper assassination. Unfortunately, Iosef may have also bitten on a little bit more than he can chew. A, to him, petty little street crime of the mob prince, directed at some seemingly random annoying guy to teach him a lesson, has made him an enemy of John Wick, the most infamous assassin in New York, who proceeds to start a one-man-war against the mob. Viggo starts putting all of his resources into taking Wick down. The question is, will it be enough?