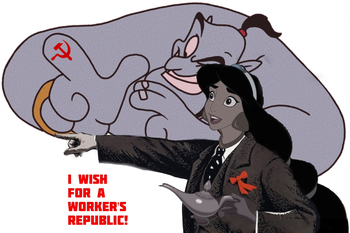 Princess Jasmine: A New Leader for a New Agrabah note  Art by ymcameron.

The kingdom of Agrabah — located somewhere in the medieval Middle-East — is facing a political crisis. Princess Jasmine, the only daughter of the Sultan, is refusing to get married to a prince, putting the kingdom’s international relations at risk. As if that wasn’t enough, Jafar — the trusted royal vizier — has hired street rat Aladdin and his monkey Abu to find him a magical artifact containing an all-powerful genie he plans using to take over Agrabah for himself, but things don’t turn out quite like anybody imagined...

Followed by Pokémon: The First Movie.