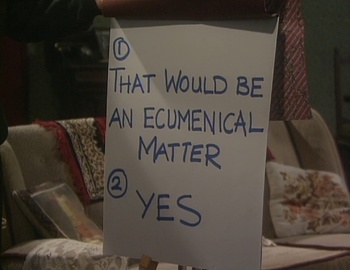 Unfortunately for Father Jack, only one of those new phrases will be any help when it comes to obtaining alcohol.

A trio of Bishops are coming to Craggy Island to promote the Holy Stone of Clonrichert into a Class-Two holy relic. Ted does not look forward to the visit, given the eccentricities of the parochial house's residents. Of particular issue is Father Jack, whom Ted tries to train into controlling his bad habits and deflecting questions.

On the day of the visit, the Bishops spend some time with the priests. Dougal gets to talking with Bishop O'Neill about how there's no proof that God truly exists, causing O'Neill to put his faith into serious question. Ted's time with Bishop Jordan ends unexpectedly when he dies of shock from a sewer grate spraying water into his robes (caused from an earlier attempt to fix the parochial house's toilet). And despite Jack's willingness to behave after Ted's training, Bishop Facks' exuberance and incessant finger-poking sets him off, prompting a very painful retaliation. By the end of the day, Facks is in the ambulance to have the Holy Stone removed from his rear, O'Neill has renounced his faith and is now a hippie, and Jordan's dead body is being hauled off to the funeral home. In Ted's words, "That went pretty well, I thought."

That would be an ecumenical matter!