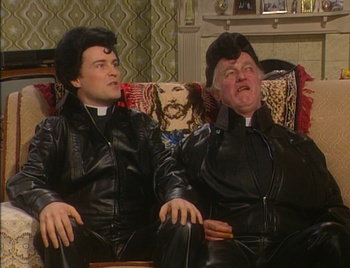 Wait, don't tell me... you're Cliff Richard, right?
That was the Pope? That old fella living in the art gallery?
Advertisement:

With the annual "All Priests Stars in Their Eyes Lookalike Competition" nearing, Ted shows everyone his Elvis costume, only to find Dougal and Jack wearing exactly the same outfit as him. Ted had been talking about dressing as Elvis for weeks, and Dougal concedes that's "probably" where he got the idea; since reasoning with him is nigh on impossible, Ted accepts he will have to go as Mother Teresa again. Father Dick Byrne (from Rugged Island parochial house) calls Ted and tells Ted that he has no chance of winning. But, since the judge of the competition, TV presenter Henry Sellers, is staying on Craggy Island, Ted believes that their chances of winning will improve if they are nice to him.

Before Henry Sellers' arrival, Dougal watches a segment of one of Seller's programs and inquires as to why Sellers supposedly left the BBC. When Ted does not answer, the conversation turns to the competition. Dougal offers to let Ted do Elvis while he does Mother Teresa, as Ted had thought of Elvis first. However, claiming to have been selfish, Ted tells Dougal that he can be Elvis if he wants. Meanwhile, Jack has consumed a bottle of Toilet Duck, causing hallucinations, and this leads to Ted reminding him that he is going to be 'seeing pink elephants again'.

When Henry Sellers arrives, Ted greets him warmly but Dougal is unable to think of anything to say. At Ted's prompting, he asks him his age, which is apparently 37. Jack hallucinates again when Henry speaks to him, and he runs away in fear. Henry is accompanied there by Father Barty Dunne, a priest who laughs at the slightest of things (e.g. Jack losing his slippers), and can't maintain a proper conversation. Henry remarks angrily that the car journey was four hours long. Meanwhile, Dougal suddenly takes an interest in Henry's 'mad hair'.

Ted offers to get Henry anything he wants, and says he means anything, but practically it only means sandwiches. After that, Ted is unable to fulfill any of Henry's requests like getting him an English newspaper, and he even lies about the nature of Rugged Island to keep Henry in the parochial house. Ted and Mrs. Doyle then cajole Henry into taking a drink of sherry before bed. After one drink, Henry consumes more alcohol and becomes angry at everyone, destroying the living room in the process. Father Dunne discloses that Henry is a raging alcoholic who had been "on the wagon" for a year, and that his drinking was the reason the BBC sacked him. Henry then jumps out of the window and runs off into the wilderness.

The next day, Ted, Dougal and the island's policeman attempt to track Henry down. When they find him, he is still in an alcoholic state in the woods, but now with fewer clothes. Ted makes a noise with some pans to drive Henry out into the open, allowing him to be shot with a tranquilizer dart. After Henry has sobered up at the parochial house, Ted assures him that nothing untoward happened (Henry blacked out and forgot the night's events). Dick Byrne calls Ted again, and suggests a bet of, at first £1, then £2, ultimately £5, on the outcome of that night's competition. Father Jack then returns, very drunk; Dougal suggests sobering him up, but Ted says that he has an idea.

That night at the competition, Dick Byrne and his fellow priests, Cyril MacDuff and Jim Johnson (who performed as Diana Ross and two of the Supremes) are in the lead with a judge's score of nine out of ten. Then the Craggy Island priests' entry, narrated by Ted, begins. Dougal represents the young Elvis, who "one day in the 1950s created rock and roll". Ted then appears as Elvis on his 1968 comeback, with Jack representing the later part of his life by sitting, wearing garish clothes and confusedly holding a large hamburger. This effort receives full marks of 10 from Henry, and they win the competition. Back at the parochial house Dick pays up, and then heads off back to Rugged Island with Cyril and Jim. Mrs. Doyle then brings in a bottle of Champagne with four glasses. Henry takes a sip (believing it won't do any harm) and once again goes into a drunken rage and jumps out of the window. Ted exasperatedly says they'll start looking for Henry in the morning, and he and Dougal celebrate their victory by shaking hands and looking proudly at their new but tiny trophy.