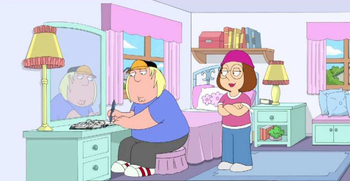 When Meg catches Chris stealing money from Lois' purse to by new sneakers, she blackmails him into doing things for her. But when the demands to keep the secret a secret go too far, Chris runs away to live with Herbert. Meanwhile, Stewie and Brian become fans of Anne Murray's music and go to the woman herself to discover the meaning behind her hit, "Snowbird."note Brian thinks the song is about accepting old age and death, while Stewie thinks it's a more positive song about getting away from a bad relationship and starting over