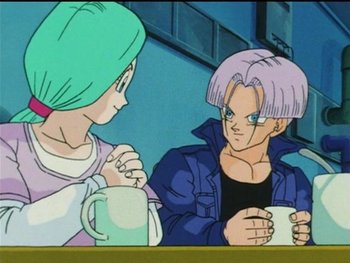 Trunks now knows more about his father than Bulma ever did...and more about Bulma than he ever wanted to.

With the defeat of Cell, the main timeline is saved. Older, wiser, and finally strong enough to save his own future, Trunks bids farewell to the past to face... his past.

Alright, tropes! I know you're out there!: