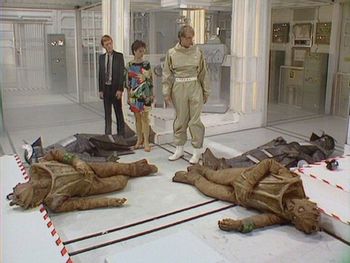 Cue sad trombone.
"There should have been another way."
— The Doctor, and pretty much everyone who worked on this serial
Advertisement:

The one where Ingrid Pitt karate-kicks a pantomime horse.

After having a wonderful time in the Death Zone, the Doctor decides that Tegan should see what future Earth will be like. The TARDIS lands in orbit of the planet Earth in the year 2084, where she immediately comes under attack by Sentinel Six, a killsat in charge of utterly destroying everyone without proper identification.

Mild panic ensues, but the Doctor is able to drop the TARDIS off somewhere mildly safer: an undersea military nuclear missile launch base known as Sea Base 4, also currently under threat of nuclear attack. The Cold War has somehow started up again by the year 2084, or maybe it's still going. The best we get from the Doctor is that "two power blocs" are engaged in a Cold War of sorts, but the entire story remains deliberately vague about it all.

As the Doctor explains this, we get introduced to our Red Shirt Army of the week, unisex eyeshadow and all. The "Them" bloc is acting up again, and the brave crew snap into action, as their computers say it's time to prepare the nukes. Well, maybe. As Commander Vorshak explains to his men, it could be real or it could all be a drill: they won't know until it's time to press that button. As a further failsafe, they also need someone lashed up to the machine itself to make sure the nukes can be launched by giving the final authorization. Cue Ensign Maddox, who's actually the inexperienced backup of someone unimportant who died offscreen. Maddox never really thought he'd be needed, as he was just there to observe, so he freaks out a little at the pressure despite Commander Vorshak telling him he's doing a great job... and it turns out it was all a drill, anyway.

Meanwhile, old Doctor Who enemies the Silurians and their sea-cousins the Sea-Devils are waking up from a long rest. They're now also calling themselves "Silurians" and "Sea Devils", despite both those terms having been made up by the Doctor (and despite "Silurian" being technically wrong anyway, as the Doctor had already pointed out years before). One of the Silurians, Icthar, is in charge as one of the remaining survivors from the last time the Doctor ran into them. However, time has not been kind to Icthar, or the others in his charge, as the Silurians now mumble incoherently with a little flashing light to tell us who is talking to whom. The Sea Devils, meanwhile, whisper menacingly... while seemingly bobbing about with their heads tilted to one side. (As Janet Fielding says in the commentary, it always looks like they're going "...you wha?") The Silurians and Sea-Devils have plans and these plans involve Sea Base 4.

Ensign Maddox, suffering from a panic attack, goes to the medical bay to lie down for a while. However, Senior Officer Nilson and Doctor Solow are up to no good, deciding to take advantage of Ensign Maddox's special computer brain to brainwash him. Because Nilson works for the "Them" Bloc! Doctor Solow follows along with this... because, presumably, she's also with the "Them" Bloc. Maddox is reprogrammed to sabotage the systems of Sea Base 4, but it's unknown if Nilson and Solow are trying to either capture the base or start the third (fourth? fifth?) World War.

Finally involved in the story again, the Doctor and his companions decide to meander around the top secret undersea nuclear missile base for no reason, exploring the area and getting a feel for the future. Since they landed in a storage closet, the Doctor decides that pointing out the barrels of hexachromite gas, which is a gas that's lethal to all marine and reptile life, would be a cool fact of the day for his companions to know. And then they're immediately chased around by guards, because Turlough accidentally sets off some alarms. While trying to provide a distraction by intentionally triggering the nukes, the Doctor is shoved into a giant pool of water. Inside the reactor everyone was just running through. Tegan frets about the Doctor for about two seconds, after which Turlough decides "HE'S DROWNED." Tegan and Turlough are then quickly captured by the soldiers of the "Us" Bloc, and the Doctor Who franchise ends in the Doctor's permanent death...

But not for long! Because it turns out the Doctor has survived! (And Davison is freezing. The water was supposed to be allowed to "warm up" over a few nights, but the ridiculously reduced schedule left them filming within minutes of filling up the reactor pool.) The Doctor somehow survives the intense radiation and swims (dressed) his way out of the reactor, taking the time to borrow another guard's outfit. And then make a fart joke. But not before deciding to overload Sea Base 4's reactor to "give them something to do".

The base crew is less than amused; also, Maddox seemingly going berserk and dying after taking out several important missile-launching computers doesn't help matters. But the Silurians attacking Sea Base 4 en masse really pushes the base into panic mode. The Doctor charges onto the bridge of Sea Base 4, and promptly realizes what's about to happen. He quickly explains to the crew of Sea Base 4 who's about to attack them all, and that they need to get ready for the worst: a Silurian weapon called The Myrka. The large, lumbering beast rips through Airlock-1 like it was badly supported plastic. This bio-engineered weapon is so fearsome that humans run up to be embraced by its deadly hugs and random spurts of electricity. Meanwhile, a contingent of Sea Devils, resplendent in their Samurai armour, begin shooting circles of light at soldiers from Airlock-5. The Doctor is able to destroy the Myrka with a bright blast of UV Light, but not before it kills Doctor Solow in a remarkable display of hand-to-hand prowess that was never ever rolled out before the public as a valid reason to kill off the show.

It doesn't take long for the Silurians to take over Sea Base 4, and they begin repairing all the damage done by the saboteurs, so they can launch the missiles themselves and begin World War Whatever. Don't bother asking why they didn't just sit and wait for mankind to do the job for them, otherwise we wouldn't have a story. The Doctor does his best to argue that everyone should just get along, but Icthar will have none of it. After all, some jerk also named the Doctor promised that last time, and his people all wound up dead. Also, it's time to launch the missiles, destroy the Humans, and generally rule the world.

The Doctor escapes from the bridge along with a few of the humans and stumbles across the hexachromite gas mentioned earlier. Quickly running out of time, the Doctor realises that he'll have to use the hexachromite gas to flood Sea Base 4 and kill off every Silurian and Sea Devil. He goes into a bit of an existential crisis at having to kill so many people to save even more people, and commands Tegan and Turlough to tend to the gruesomely melting Silurians, while he tries a second option. He hooks up his brain to the Wetware CPU — which leaves him nearly catatonic with pain, his skin fried, his mind invaded in the worst possible way, and with everyone around him (except Team TARDIS) dead anyway because they just couldn't stop killing each other.

But hey, no World War.

This serial was a nightmare behind the scenes. As production was starting up, then-Prime Minister Margaret Thatcher announced a Parliamentary election, which resulted in the production for this serial losing two weeks to election coverage. Rather than cancel the serial and funnel the leftover money into the other productions that season, it was decided to push ahead anyhow. The green paint on The Myrka literally didn't have time to dry before its scenes were filmed, and one shot is from a technical rehearsal because there was no alternative footage available.

"Warriors of the Deep" is also noted for being the last appearance of the Fifth Doctor's "first" outfit. The Doctor changes pants into something more creamy-pink and adds a stripe to his sweater for the next serial.

The effects of Doctor Who

Former BBC controller Michael Grade discusses his motive for trying to cancel Doctor Who in 1985 (prior to its actual cancellation four years later by successor Jonathan Powell), singling out its effects as underwhelming and laughable compared to bigger-budget sci-fi films of the era. Grade and presenter Paul Merton then play a clip from the 1984 Doctor Who serial "Warriors of the Deep" to prove the point, with them and the studio audience both cringing and laughing at the choreography of a fight scene and the execution of the special effects.

The effects of Doctor Who

Former BBC controller Michael Grade discusses his motive for trying to cancel Doctor Who in 1985 (prior to its actual cancellation four years later by successor Jonathan Powell), singling out its effects as underwhelming and laughable compared to bigger-budget sci-fi films of the era. Grade and presenter Paul Merton then play a clip from the 1984 Doctor Who serial "Warriors of the Deep" to prove the point, with them and the studio audience both cringing and laughing at the choreography of a fight scene and the execution of the special effects.