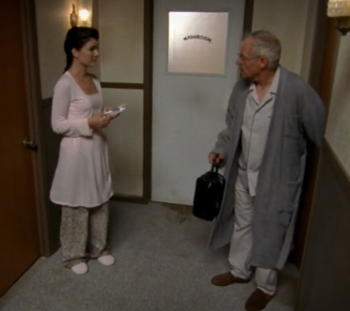 A Plot: After seeing Phil turn a couple away from the hotel, Oscar devises a get-rich-quick scheme by falsely advertising his house as a bed and breakfast. Emma finds out, but despite some early apprehension, she goes along with it when she realizes how much money they're making. Unfortunately for them, Lacey's big mouth spills the beans.

B Plot: Davis starts borrowing Brent’s car without telling him why he’s taking it. Brent eventually finds out Davis is using it as an undercover "ghost" car to pull over speeders. Delighted by its success in this arena (and how much extra stuff Davis does for the car), Brent nicknames it "Super Car", but he and Davis get one-upped when Karen does the same thing with Wanda's car.

C Plot: Lacey wins Hank’s handyman services at a silent auction, but ends up having to do twice the amount of work because of it, as Hank never seems to finish the job. Lacey pawns Hank off on Karen, thinking it will get him out of her hair, but is furious when Hank actually does good work at Karen's place.