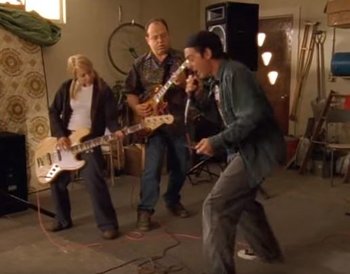 A Plot: Brent, Hank and Wanda decide to bring back their old rock band Thunderface. They decide that they should probably have a drummer and set out looking for one, finally going with surprisingly-good Karen.

B Plot: Oscar believes that a country singer stole the idea for a song from him a long time ago, and he tries to prove it to the cops. When Davis realizes he could use the case for a free concert, he agrees to help.

C Plot: Lacey is chosen to write the blurb for the new town plaque, so she goes on a mission finding out the history behind the name Dog River. She is shut down at every turn by Emma, who ultimately reveals a dark secret about Lacey's family.