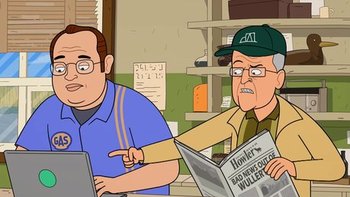 A Plot: When Wullerton's weekly paper goes under, the gang worries the Dog River Howler will too. Wanda and Emma set out to recruit new advertisers...
B Plot: ...while Brent helps Oscar start an online version that raises eyebrows.
C Plot: Karen asks Hank to help deal with a crow, but befriends it after it willingly accepts her homemade muffins. Hank gets jealous, and when the crow steals his shiny pocketknife, he sets out to break them up.
D Plot: After Brent comments on Lacey's "city walk", she becomes self-conscious and asks Davis to help her develop a more "country" posture.