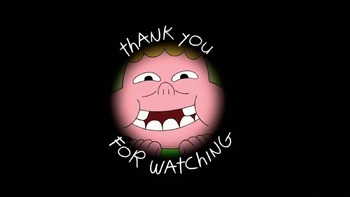 "It was worth it."
The Grand Finale in Clarence's five-year run on Cartoon Network has the titular Clarence discovering that Sumo has new friends at West Aberdale.

The whole series ends with 130 episodes due to the show being somewhat overshadowed by Teen Titans Go!, thus being cancelled.

Jeff: But if I get bedbugs, you guys are paying my hospital bills.
Thank you for watching.