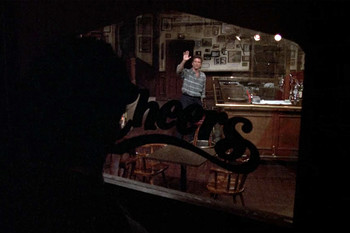 It's a slow night at Cheers, as the barflies are watching the Cable ACE Awards, mainly for the chance to ogle the female hosts. Sam returns from his sex therapy session, and Rebecca's still dating Don the plumber (Tom Berenger), and still hoping that he'll propose to her. When he does, she says no, even though she really, really wants to. Eventually, Don flees the bar.

On the TV, the winner of the next award is one Diane Chambers, not seen since she and Sam called off their wedding and she left town six years ago. Yep, Diane (Shelley Long) is back, and she's still Diane. Sam catches her speech (hard not to when it goes so long), and decides to give Diane a call for old time's sake. It doesn't take long for them to fall back into the old routine of lying to one another. When Diane tells him that she's married to a man named Reed, Sam fabricates a wife of his own. Sam suggests Diane come visit the bar so they can catch up, believing, rightly, that Diane's story of success is a lie and that she'll never actually come around. Norm knows better, though.

Sure enough, the next day Diane returns to Cheers, and offers to take Sam to lunch with his wife. Sam scrambles, asking a by now entirely distraught Rebecca to pretend to be his wife. Lunch doesn't go well, between Reed's suspicious behaviour, Rebecca's Rebeccaness and the fact she and Sam didn't bother corroborating any cover story before going to Melville's. Things don't get better when Don appears, insisting Rebecca marry her and refusing to take no for an answer, though this time Rebecca does say yes. Then Reed's boyfriend enters.

Left alone, Sam tells Diane he only made the pretense to stop Diane getting the idea he's alone and miserable without her in his life. Diane thinks he's covering for anger at how she didn't return six years ago. She explains that she had written a book, but didn't want to come back until she was actually successful, and six months became a year, and by that point she felt she'd been gone too long. Quietly, Sam admits that they have once again proven they just don't work together. Diane admits she doesn't have a lot of people in her life - even Reed's just her dog groomer, but it's the life she's chosen for herself.

The next day, Norm finds Woody's actually managed to get him a job, and Rebecca announces she and Don have gotten married. She's got mixed feelings about it, even though she loves him and he loves her. Carla, however, gets worried when she notices Sam's missing. When Frasier tries reassuring her, Sam enters to announce he and Diane are back together again, and they're getting married. And Sam's planning to move to LA.

At the airport, Sam and Diane's flight to LA is delayed, and as they wait, the two start to have second thoughts, thinking they can hear the PA system speaking to them directly, cautioning them about their choices. As the plane returns to the terminal, Sam and Diane hold hands, knowing what comes next.

Sam returns to Cheers, and decides to crack open a box of cigars, offering them to the rest of the gang, but everyone makes excuses and leave Sam on his own. For five seconds. Turns out Diane phoned to tell them what happened, and they were just messing with him.

The gang hang out over their cigars, with a brief reappearance from Rebecca, still uncertain about how her life's turned out. They muse on the meaning of life, family and friendship, until they decide it's time to leave. The last one out is Norm, who turns back to Sam and tells him he knew Sam wouldn't leave. That he knew Sam will always come back to his one true love. And Sam knows who that is.

Left on his own, Sam reflects on this, and comes to the conclusion: "I'm the luckiest son of a bitch on Earth."

A customer approaches the door, but Sam tells him they're closed, and with that, stopping only to adjust the picture of Geronimo hanging in the back of the barnote A tribute to the departed Nicholas Colasanto, as the picture of Geronimo, formerly kept in his dressing room, was displayed on the bar set as a reminder of him, turns off the lights.