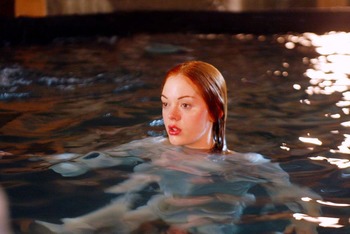 Cole's twisted attempts to win Phoebe back destroys the Power of Three. The Charmed Ones must overcome the destruction and pull together to vanquish the desperate Cole.

Paige thinks she's found a way to get past Cole's protective shield, by using an invisibility potion to sneak into his apartment, jump in his body and blow him up from the inside. Leo doesn't like this idea, thinking it'll take the Power of Three to vanquish Cole for good. Paige succeeds in getting inside the apartment and blowing him up, but he reassembles and blows her out the window. She orbs to land in the bay.

Piper is practising for her pregnancy on a birthing ball with the help of her sisters, Leo and a Gypsy named Eve, even though she's adamant about having her baby in a hospital. Paige comes downstairs having overslept. Suddenly, she sneezes and briefly orbs out before orbing back in, having caught a cold the night before. She says she only did it to give Phoebe some peace, but Phoebe says she's completely over Cole. Piper isn't happy either; they agreed to go on a hiatus from fighting demons during her last trimester.

Cole has decided to accept the Avatars' offer to join them but says that he needs to take care of something first.

Michelle Branch is playing in P3, while the sisters, Leo, Darryl and Sheila are celebrating Darryl's promotion to lieutenant. The others think Paige is too sick to make it, but to everyone's surprise, Paige shows up. She tells Piper and Phoebe that she's thinking of getting her own place again; after being an only child for 25 years, she's used to doing things on her own.

Cole becomes an Avatar but first, he wants to use his new powers to get Phoebe back. Believing that Paige is responsible for turning Phoebe against him, he wants to alter reality so that Piper and Phoebe never meet her. The Avatar claims changing one minor detail could have catastrophic results, but Cole won't hear of it. He starts chanting a spell which results in Reality Warping.

Paige feels a sneeze coming on, and Piper and Phoebe hustle her to the office. Paige sneezes and orbs out at the exact moment Cole finishes casting his spell. She finds P3 an abandoned shambles. A vagrant is sleeping there and pulls a knife on her. Paige, unsuccessfully, tries to orb the knife out of his hand, but her powers don't exist in this alternate universe. She calls for Leo, who orbs in, but, initially, doesn't recognize her and Paige tells him that she is his charge. Leo tells her that P3 has been shut down for over a year, and is surprised that Paige knows about magic. Paige asks Leo to orb her to Piper, in hopes she can help sort it out.

Leo orbs Paige to the junkyard where a Lazarus Demon is skulking about; suddenly, Piper shows up, wearing a provocative leather outfit. She freezes the Lazarus, then jumps down and unfreezes his head. Piper starts grilling the Lazarus about Shax. The Lazarus stonewalls, even when Piper blows off both of his arms. Paige is surprised—until Leo tells her that Shax was never vanquished in this reality. Piper blows up the Lazarus. Paige and Leo go to Piper, who doesn't recognize Paige either. Piper has been so obsessed with hunting down Shax and avenging Prue's death, that she's walked away from everything else—including P3, her Charmed life and her marriage to Leo. Paige tells her that she hasn't really vanquished the Lazarus—she knows the only way to keep them from resurrecting is to bury their remains in a cemetery. Just then, the Lazarus resurrects and throws a pipe at Piper, but Piper ducks away and blows him up again. Piper is surprised, but Paige tells her that she knows about them because they fought one together with Phoebe ("Marry-Go-Round"). She wants Leo to orb her to Phoebe, but Leo tells her that Phoebe is still in the manor and he isn't allowed there. Paige decides to head there herself.

Cole is standing outside the manor, when the other Avatar arrives. He begs Cole to undo the spell. He informs Cole that he is not an Avatar here, and he doesn't have any of the powers he acquired from the Demonic Wasteland either, including his invincibility. Instead, he is Belthazor. Cole doesn't seem to mind; he tells the Avatar that he and Phoebe were at their best when he was still half-demon.

Cole is the Source's personal representative in this reality. He is married to Phoebe, and they rule the Underworld from the manor. A crowd of demons have thrown him a surprise birthday party. One makes a remark about Cole's age and the Seer incinerates him. Phoebe comes downstairs in a slinky red dress and Cole compliments her — raising Phoebe's suspicions. Cole tries to kiss her, but Phoebe pushes him away—and lets another demon kiss her hand right in front of Cole. The Seer assures Cole that all is well—and implies that she intends to have Phoebe killed, once their child is conceived.

Paige runs into Phoebe in the kitchen and tells her of the changed reality. Phoebe calls for her bodyguard — Darryl. Paige knocks Darryl out. Phoebe points a knife at Paige, but Paige tells Phoebe that in her reality, she's free of Cole. Darryl comes to and chases Paige out of the manor. She calls for Leo, who arrives just as Darryl opens fire on her again. Leo orbs Paige to the cemetery. Paige tells Leo that she recognized several demons that she and her sisters vanquished in their reality—meaning that many of the innocents they protected are dead too. Leo shows Paige a headstone with her name on it. He'd learned from the Elders that there was, indeed, supposed to be a fourth Halliwell sister—but they didn't find out about her, until the Source had her killed shortly after Prue's death. Piper joins them after burying the Lazarus; she's now convinced Paige was telling the truth.

Cole remembers his experience in the original reality, much of it different from the altered reality. For instance, he's surprised that Darryl works for him. The Seer is puzzled by Cole's behavior, and reminds him that he originally wanted Darryl killed before Phoebe cast a spell on him and made him her bodyguard. Cole sees Phoebe heading upstairs with another demon. He blazes up in anger and is about to kill the demon, but the Seer stops him, telling him he and Phoebe have an open marriage and cheat on each other left and right. The Seer shows Cole one of his girlfriends in this reality, a blonde demon named Darla. Cole shoves Darla aside and storms upstairs.

At the ruins of P3, Paige tells Piper and Leo about her reality. She mentions that Cole has become invincible. However, Leo points out that if Paige has assumed the life this reality's Paige would have led, Cole has assumed the life of this reality's Cole—meaning that he is Belthazor here. Paige realizes this means he isn't invincible in this reality, and they can vanquish him once and for all. She remembers the vanquishing potion required some of Belthazor's flesh, owing to his status as an upper-level demon. They head for the manor.

At the manor, Cole bursts into the bedroom and finds Phoebe in bed with the demon. He vanquishes the demon with an energy ball and argues with Phoebe. Cole can't believe that Phoebe doesn't love him in this reality either, especially, given how fiercely they'd loved each other. Phoebe retorts that she gave up a lot as well—including her Charmed heritage—to be with Cole. She also tells him that she's still with him only to protect Piper. Phoebe leaves the room. Cole follows and runs into Piper, who blasts him into a wall. Leo and Paige orb in. While Cole is still shaken up from Piper's blast, Paige uses Piper's knife to cut a piece of Cole's flesh from his hand. Cole tries to hurl an energy ball, but Phoebe stops him. Leo orbs Paige and Piper away. Cole hits Phoebe and knocks her down. He orders his men to hunt down Piper, Paige and Leo. Phoebe realizes that Paige was telling the truth. Cole quickly realizes why Paige was after part of his flesh, and vows that if he dies, Phoebe will die with him.

At the ruins of P3, Paige is making the vanquishing potion in a makeshift cauldron. Piper is impressed at Paige's abilities. Paige tells her that in her reality, Piper taught her all she knew about potion making.

Piper, Paige and Leo slip into the manor and Phoebe warns them to leave. Cole shows up and blasts Piper, Paige and Leo with an Energy Ball. He, then, telekinetically draws the potion bottle towards him. Phoebe, at Paige's urging, grabs an unconscious Piper's hand as Paige takes her other hand. The chandelier shimmers and bathes the sisters in it's light. Cole throws another energy ball, but it bounces off the light. The Power of Three is restored, and so are Paige's powers. Paige orbs the potion to her hand. Just when Paige is about to throw it, Phoebe takes it out of her hand. Cole begs Phoebe not to kill him, but Phoebe throws the potion at Cole, vanquishing him.

The rightful timeline is restored. Paige, however, is still orbing when she sneezes. She decides to stay in the manor for now.

The sisters go to Cole's apartment and find it abandoned. Paige tells them what Cole has done, and that he's gone for good. Phoebe stares at a picture of her and Cole from a happier time, and thinks that their relationship simply wasn't meant to happen. Paige wishes Cole "Happy birthday" before the sisters head back into the elevator.