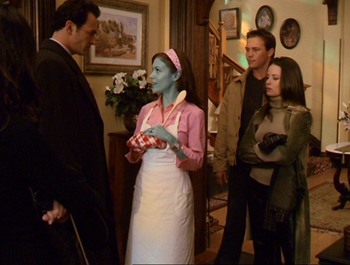 The sisters must teach a 10 year old boy with fire powers how to control them before his demon bounty hunter parents find him.

Phoebe tells Cole about her favorite classic TV show, Bewitched. She loves this show, but is concerned with becoming an old-fashioned housewife. Cole asks Phoebe to marry him and offers her Grams' Ring. Phoebe puts on the ring, and it glows ominously.

A young boy, Tyler, is about to be sent to The Academy. He does not want to go, and as he becomes angry, his bed catches fire.

Leo and Piper are having a small spat; Leo wants to bind their future child's powers, while Piper does not. Paige has recommended Cole for a job at social services; his first assignment is to deal with a slumlord. Tyler, meanwhile, has been brought in; he is unwilling to talk, and he ends up setting fire to a wastebasket. Paige sees that he started the fire and looks for him after he runs off. His foster parents appear, and it turns out that they are demons. Paige brings Tyler to the manor, where Piper explains that he is a magical being. Phoebe acts more and more like an old-fashioned housewife.

The foster parents appear at the manor. Piper becomes suspicious and they attack with energy balls. Tyler sets them on fire. Tyler becomes guilty and Piper tries to reassure him. Then she shows him the Book of Shadows and finds the entry for demonic bounty hunters—his foster parents. They then find the entry for a firestarter—Tyler. The foster parents were going to send Tyler to serve the Source. Another bounty hunter appears in the kitchen, demanding to know where Tyler is, but Phoebe just complains about his tone of voice, unwilling to fight him. Just as he is about to throw an energy ball at Phoebe, Piper runs in and blasts him to bits. Cole attacks the slumlord, and ends up getting fired, though he races to quit first. Phoebe flashes into black and white, to everyone's surprise.

Leo and Piper orb to the Academy, and Tyler jumps on to them as they go. They are confronted by demons. Piper freezes them and tells Tyler to go back. He insists and tells them that he doesn't want bounty hunters to keep chasing him all his life. Piper agrees in defeat and unfreezes the demons. Piper tells them that they are bounty hunters and Tyler says that he is a Firestarter. One of the demons ask for the password and Piper blasts one of them. The others let them in as it was the "password".

Phoebe continues to flash into black and white. Cole realizes the connection to Bewitched, a black and white show in its first season. Leo, Piper and Tyler meet with Ludlow, who runs the Academy. Tyler attempts to set Ludlow on fire, but Ludlow survives and Piper tries to secretly freeze him, but also fails. Ludlow magically freezes Tyler and then flings Leo and Piper out of the Academy gate. Outside, Leo tries to orb back inside, but fails as the Academy gate has a force field.

Phoebe is now black and white full-time. Cole realizes that she became so when she put on Grams' ring. Paige orbs the ring into her hand and Phoebe returns to normal. Paige finds an inscription that Grams used to curse the ring. The sisters and Leo return to the Academy, but are unable to get through the gate, until Tyler's screams causes Piper to focus all of her power and blow the gate open. The group makes their way to Ludlow's office, where Piper blasts him, but he survives, so they use a Power of Three haiku written by Paige, in Phoebe and Piper's confusion, to vanquish Ludlow. Leo heals Tyler and they leave. Piper offers Tyler a potion to bind his powers and Paige finds him a nice new foster home nearby so he can have a normal life. Piper and Leo reconcile.

Phoebe has a bath with Cole and she tosses the ring into the bathtub drain.