Recap / Charmed S3E3 Once Upon A Time 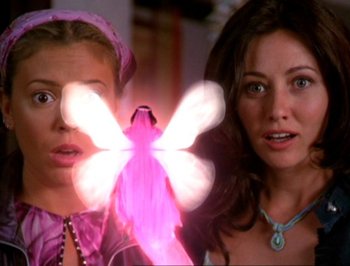 Piper goes on strike against the Powers That Be so Prue and Phoebe must work without her to save a little girl protecting a fairy princess from trolls.
Leo pulls Piper aside at P3. They kiss for the first time in a week and Leo says he has come to say goodbye; "they" have ordered him never to see her again. Leo's voice begins to echo, and then Piper's. He urges her to forget about him. He orbs away. Prue appears and urges Piper to wake up. Suddenly, Piper finds herself in her room, with Prue by her side—it was all a dream. Piper is still distraught over Leo being taken from her, and doesn't think "they" will ever let him come back. Prue consoles her. Prue calls Phoebe, who is driving Prue's car, and tells her about Piper's dream. Phoebe, distracted, almost hits a little girl in the street. The girl, Kate, is holding a small box, protecting it from unseen creatures. Suddenly, one of them scratches her on the arm. Phoebe comforts Kate and finds three claw marks on her arm.

The sisters prepare some hot chocolate and cookies for Kate. Phoebe tries to get Kate's coat from the car but finds all the keys missing. Kate suggests that the fairies hid them, but catches herself—she's not supposed to talk about fairies. Kate's mother and stepfather arrive to take Kate home; she urges them to stay out of the door, because it's an "in-between"—a place where trolls live. Kate sees a troll, a small, grotesque creature, but none of the others do.

Kate's mother and stepfather say that Kate has been troubled since her parents' divorce and has reverted to the "imaginary friend" stage. Phoebe believes Kate, but Piper is not so sure. Prue suggests they sleep on it.

Kate's mother tucks Kate in. Kate wants the light left on, but her mother refuses. As she leaves, unseen figures begin to disturb the room.

Prue and Phoebe find old watercolors of their imaginary friend, a fairy named Lilly, in the attic. Phoebe finds information on fairies and trolls in a children's book. They live in a parallel world separated by places between light and dark, or "tweens." Prue is skeptical at first; Phoebe found Kate in a street, not a tween. However, Phoebe recalls that she found Kate at midnight—when the world becomes one giant tween. The Book of Shadows is silent because it was written by and for adults. Just as Prue and Phoebe are heading out to Kate's place, Cole calls Phoebe and chats her up, and after a while says he sounds like Billy Appleby. Phoebe recognizes the name, the protagonist from Kill It Before It Dies. It turns out Cole is looking at his extensive dossier on Phoebe. Cole wants to meet at the manor, but Phoebe waves him off and asks to meet him at P3. Phoebe shows Piper the old drawings of Lily; she was Piper's imaginary friend as well. Prue tells Piper about Kate, but Piper isn't willing to do anything for "them" anymore and heads out. Phoebe thinks Piper is on strike.

The fairy dust is still affecting Prue and Phoebe that night at P3. Piper walks in to find Prue and Phoebe singing old children's songs as the patrons leave in droves. Piper demands to know what's going on. When Prue and Phoebe tell her they saw a fairy, Piper suspects something witchy and freezes the room. Prue and Phoebe tell Piper about the fairy dust. They try to dust Piper, to no avail. Prue and Phoebe try to get Piper to help them, but Piper orders her sisters into the parking lot to wait for a cab. As Prue and Phoebe walk out the door, they dodge several trolls. Prue and Phoebe find the manor an intimidating place with its many doorways. The doorbell rings and Cole is at the door. Puzzled at their behavior, he asks to use the bathroom. They send him to one. He locks the door and shimmers to the attic. Prue talks to Kate over a walkie-talkie and tell her that the dust didn't work on Piper. Kate says that Piper must not believe in fairies. Cole tries to take the Book, but it leaps off its stand and onto the floor.

He turns into a grotesque, muscular demon and reaches for the book again, but it slides away from him. Prue and Phoebe think they hear a troll and enter the attic. They find demon-Cole still in the attic, but he shimmers away. The trolls attack, steal the key from Phoebe, and trip her and Prue down the stairs. The rough landing turns Prue and Phoebe back to normal again, and they hustle Cole out the door.

Prue checks the Book to put together a spell while Phoebe tries to reason with Piper. Trolls have invaded P3, and one of them trips Piper while she's carrying glasses. Phoebe tells Piper about the trolls. Piper relents and decides to help, but can't find her keys—the trolls hid them. She tries to get the spare out of the register, but a troll slams it on her hand. Disgusted, Piper asks her bartender, Abbey, to close up for her. Piper steps outside and trolls trip her up. In frustration, Piper looks up and rants at "them," demanding that they give Leo back.

Midnight approaches and finally Piper comes to the manor. The three read a spell to allow them to see fairies and trolls. They go to Kate's house. Midnight strikes and the trolls attack in Kate's room. The sisters enter and are also beset by trolls; the spell didn't work the trolls grab Thistle's box, drag Kate under the bed and turn her into a fairy. They open Thistle's box and take Kate and Thistle.

Piper blames herself for the failure of the spell. Phoebe tries to get a vision from the box. Piper talks out her feelings and the spell begins to work; they see a fairy in the window. The fairy leads the sisters into the woods, and then flies away when it sees a cave. The cave is "Troll Central"; Kate and Thistle are in a suspended cage and the trolls light a fire under them. The trolls spot them and attack. Phoebe levitates and Prue swats Phoebe toward the cage, rescuing Kate and Thistle. Prue and Piper leap the flames as Piper freezes them, and so they lure the trolls into the flames. Kate at first wants to stay a fairy, but Piper talks her into becoming human again.

At the manor, the doorbell rings. No one is at the door, but the porch is covered with wreaths and garlands—apparently the fairies' way of thanking them.

Piper reflects that marriage to a Whitelighter may be hard, that he may be gone for weeks at a time. She could not have lived with losing Kate, however, and is willing to give up Leo if it gets in the way of her Charmed duties. Leo orbs in and tells Piper that "they" have reconsidered; they are going to give Leo and Piper a chance as long as innocents aren't jeopardized.

Phoebe calls Cole, meaning to leave a message, and finds him at his desk at 2 AM. They talk a bit, and then he sends his shadow to report to the Triad.