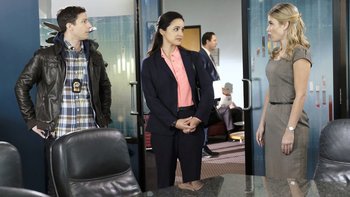 "If I had to do it all again, I would. Especially the broken penis."

"He Said, She Said" is the eighth episode of Brooklyn Nine-Nine's sixth season.

Captain Holt assigns Jake to investigate when finance consultant Seth Haggerty presses charges against Keri Brennan, a female co-worker who has broken his penis. Jake and his collleagues think the incident is hilarious until Holt tells him that Keri was retaliating against Seth because she claims he sexually assaulted her. And when Amy joins the case for personal reasons, she takes actions that might hurt both Keri and herself.

Meanwhile, Holt learns that an old nemesis of his—Ernest Zumowski, aka the "Disco Strangler"—has supposedly died during a prison transfer. However, Holt suspects that the notoriously elusive murderer has faked his death and escaped, despite evidence to the contrary. When the captain tries to prove that the Disco Strangler is still alive and track him down, Terry and Boyle fear that he's gone off the deep end in an attempt to relive his glory days.