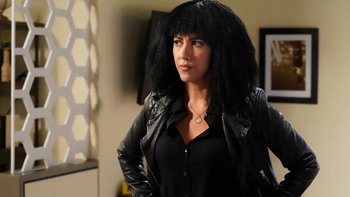 One of the many Gag Haircuts you'll see in this episode.

"The Crime Scene" is the sixth episode of Brooklyn Nine-Nine's sixth season.

Jake and Rosa work a difficult case where, despite plenty of evidence, they can't figure out who the killer is or how they got in or out. However, Jake foolishly promises the victim's mother that they'll catch the killer because she reminds him of his own mom. In addition, Rosa has a new girlfriend who's in Cosmetology school, and practices on Rosa's hair.