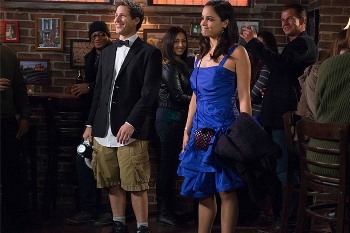 Peralta: (gets down on one knee) Amy Santiago, you have made me the happiest man on earth. I spent one whole dollar on this ring, will you go on the worst date ever with me? You have to say yes.
Santiago: Yes.
Peralta: She said YES!

Peralta and Santiago's bet over who can get more felony arrests over the course of a year comes to a head, which means Peralta gets to take her out on what he deems the worst date ever. Meanwhile, Boyle wins a Medal of Valor but is upstaged by a horse, and starts dropping "truth bombs" on everybody else after a particularly strong dose of pain medication thanks to last episode's incident. Holt tries to help Jeffords and his wife come to terms with Jeffords' startling return to the field.