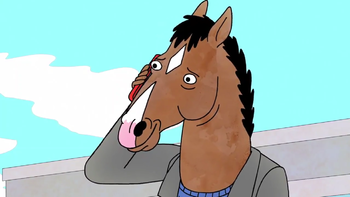 The horse's neverending pursuit of happiness seems to finally pay off...
"The woods are dark and scary, but the only way out is through!"
—Todd
Advertisement:

Princess Carolyn pitches "Philbert" as a series to WhatTimeIsItRightNow.com, after mixing up the story a bit, the buyers seem happy to take the series, especially with BoJack, who is still unaware that Princess Carolyn signed the contract for him. BoJack fails attempting to talk with Hollyhock again and talk about what happened with his mother.

Mr. Peanutbutter and Diane buy a new house and are overjoyed with their decision, but decide that they wish to take a trip to Hawaii before settling down. After a rocky start, they stay in a thrifty motel midway through the road, where they stay instead of going to Hawaii.

Princess Carolyn's alcoholism causes trouble, so Todd decides to give her a pep talk by taking her to the middle of the woods, where he learns his clown dentists have gone rabid, but it works in helping PC to get herself back together, who is now ready to face BoJack and take the series to the end. Todd enlists Yolanda to help him take care of the clowns in the woods, together, they are unable to take them out of there, but realize there's a business there. Todd starts selling people the opportunity to run from rabid clown dentists as an exercise motivation. With that business being a success, Yolanda asks him out on a date, confessing that she is also asexual.

BoJack has a sudden realization while talking with Princess Carolyn about her pitch that his D.N.A. and Hollyhock's matching doesn't mean they're father and daughter. Traveling to San Francisco, he finds out that his mother hid the daughter his father had with a maid, finds Henrietta and acquires her phone number. He travels to Wichita and gives the phone number to Hollyhock's parents, hoping that they'll give it to her and states that he will not contact Hollyhock again. He just wants her to find her birth mother she wanted. They agree to make sure she gets it.

Princess Carolyn finally manages to get to talk with BoJack about "Philbert", which he promptly accepts, noting how much PC has already done for him through the years, and supports her in the decision of hers to start thinking about adopting instead of waiting for a man to have a kid.

Back in their house, Mr. Peanutbutter reveals to have built Diane's "Belle room" in their new home, which causes Diane to be unexpectedly angry at him for yet again making big gestures she already specified to dislike. After a fight, she breaks down crying, and their marriage is implied to have come to an inevitable end.

While in his pool, BoJack gets a call of Hollyhock, to tell him that she knows he got her the number of her mother and that she has been communicating with her, getting a plane to meet her in person. She also tells him that unlike her parents, she doesn't blame him for Beatrice secretly drugging her. The episode ends as Hollyhock wants him in her life as the brother she never had and BoJack gives his first genuine smile in the entire show.

Diane compares her and Mr. Peanutbutter's marriage to a magic eye poster: it may look confusing to most at first, but the longer you squint at it, the more it makes sense. This seems like a positive statement about how they work together as a couple in spite of their differences, until Diane breaks down and admits, "I'm so tired of squinting."

Diane compares her and Mr. Peanutbutter's marriage to a magic eye poster: it may look confusing to most at first, but the longer you squint at it, the more it makes sense. This seems like a positive statement about how they work together as a couple in spite of their differences, until Diane breaks down and admits, "I'm so tired of squinting."