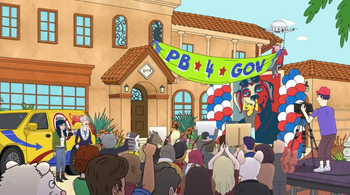 "Of course there are reasons a gubernatorial election should not be decided by a ski race, but are there also reasons it should?"
— Tom Jumbo-Grumbo
Advertisement:

BoJack has gone missing and Diane has been keeping him up to date on Mr. Peanutbutter's political campaign by leaving him messages on his voicemail. Namely, that he has challenged the current Governor to a ski race for the position, despite not at all knowing how to ski.

Katrina gets people to sponsor an amendment to the constitution in a Schoolhouse Rock-style interlude.

Katrina gets people to sponsor an amendment to the constitution in a Schoolhouse Rock-style interlude.