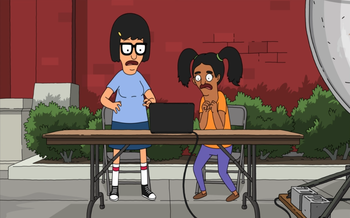 "Our science project might have just destroyed Earth!"
"That's really dumb, dad, but I love you!"
—Tina

Tina and her new science partner create a device that allows them to communicate with aliens, but their excitement turns to fear when they receive a dangerous warning message — which is actually Henry, Gene, and Louise trying to sabotage the project as Henry thinks reaching out to aliens will destroy humanity. Meanwhile, Bob attempts to sell coat racks he bought online when it turns out that they're mini-sized.